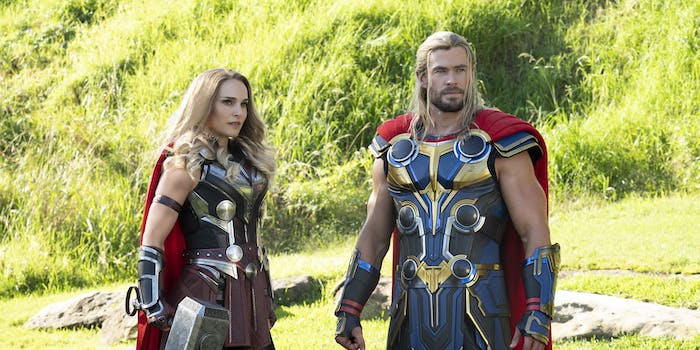 Review: ‘Thor: Love and Thunder’ is a massive disappointment

This dull and unfunny sequel is a career low for Taika Waititi.

We all know Taika Waititi can do better than this, so it’s decidedly awkward to witness the mediocrity of Thor: Love and Thunder unfold. Following the exuberant and slyly subversive Thor: Ragnarok, this disjointed sequel replaces sincere storytelling with limp, awkward banter, doing justice to precisely zero characters in its ensemble cast.

Continuing a trend for MCU spinoffs regurgitating their own canon, Love and Thunder’s first act is littered with unnecessary recaps and tie-ins. A “funny” voiceover from the alien sidekick Korg (Waititi), rehashing Thor’s backstory. A flashback to the offscreen breakup between Thor and Jane Foster (Natalie Portman). A reprisal of Ragnarok’s show-within-a-show parody where Matt Damon plays a stage version of Loki. And a brief crossover with Guardians of the Galaxy, setting up a recycled character arc for Thor.

Thor’s origin story saw him evolve from an immature jock to a selfless hero, and since then the MCU has struck a balance between his comedic side and the epic fantasy drama of Asgard. Love and Thunder essentially rewinds him to an earlier stage of development; an irresponsible dumbass once again. You get the sense that Waititi and his co-writer Jennifer Kaytin Robinson simply didn’t know what to do next with their title character.

As someone who feels a lot of goodwill toward Waititi, Hemsworth (an underrated comic actor!), and the Thor franchise in general, it brings me no joy to say that Love and Thunder’s jokes largely fall flat. There’s also far too much focus on self-conscious banter over genuine emotion, sabotaging Jane Foster’s rather heavy origin story as the newly-superpowered Mighty Thor. Meanwhile, Valkyrie (Tessa Thompson) gets no new character development besides a careful onscreen reference to an ex-girlfriend. Despite her current status as the King of Asgard, she quickly returns to a sidekick role.

While the previous three movies thrived on conflict between Loki and Thor, this one seems disinterested in its central relationships. Jane and Valkyrie’s friendship gets frustratingly little material, any friction between Thor and Valkyrie has (bafflingly!) been erased, and the Thor/Jane romance remains shallow thanks to Jane’s underdeveloped role.

This makes it doubly hard to care about their quest to defeat Gorr the God-Butcher (Christian Bale), a one-note villain who wants to kill all the ancient gods. He’s motivated by a formative betrayal of his own religion, but does the movie have anything interesting to say about faith or unreliable authority figures? Not really! However, there is a protracted sequence featuring Russell Crowe as a Greek-accented Zeus, played for laughs as a fat buffoon in a skirt. Abysmal stuff.

Thor: Ragnarok was an MCU standout because it had real personality—an energetic blockbuster with oodles of charisma and a cohesive anti-colonial subtext. None of that is present here. For a brief period, I thought Waititi was going somewhere with his return to New Asgard, transforming the home of the Asgardian diaspora into a tourist trap. But that soon falls by the wayside in favor of stilted banter and patchy action sequences.

It doesn’t help that Love and Thunder is replete with scenes where people stand in front of a poorly-lit CGI wall, utilizing the new greenscreen replacement known as The Volume. This is not the rainbow 1980s theme park ride that Marvel’s awesome posters suggest. In fact, my prevailing experience was boredom and irritation. A few Guns’n’Roses needle-drops can’t save the disorganized script and murky visuals, making this a definitive career-low for Waititi—and a disappointment for anyone who hoped to see another Ragnarok.