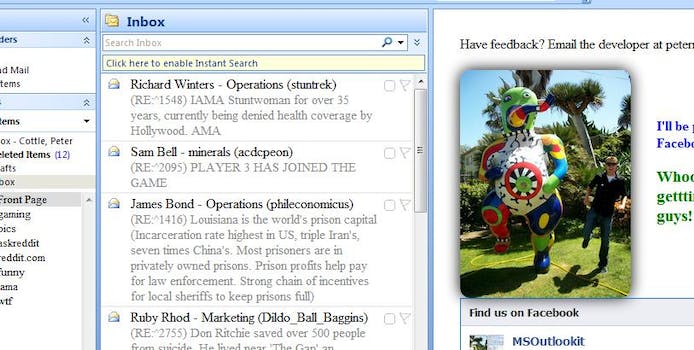 A new way of browsing Reddit could cause national productivity levels to hit entirely new lows.

Web app MSOutlookit allows users to browse Reddit while keeping up the facade of hard work. On the surface, the app appears identical to Microsoft Outlook, an email client that’s still largely ubiquitous in commercial settings.

While other third-party sites, such as Scrolldit, create attractive new Reddit browsing experiences, MSOutlookit is particularly clever because it provides an incognito version of the site. It was created by 22-year-old Peter Cottle, who will soon begin a job at Facebook thanks, in part, to his success in helping redditors avoid work

Indeed, this isn’t Cottle’s first attempt to free Reddit addicts from the cage of full-time employment: His other creation, MSWorddit, turns Reddit into an MSWord document. MSOutlookit, however, is far more devilishly-designed.

In the fake inbox of the app, a user can browse “emails” that are in reality popular Reddit posts. These posts are then displayed in the email viewer just next to the inbox. Users can also login (by sending a new “email”), post comments on other posts, and subscribe to posts oriented toward specific topics known as subreddits, although instructions on some of these basic functions are vague.

Cottle created the two apps around the same time last year, but while MSWorddit got mainstream Reddit attention, MSOutlookit languished in obscurity.

“My webserver was exploding with traffic,” Cottle told the Daily Dot in an email, “until I checked the referrals and realized it got submitted. I finished it last summer and it had a small loyal following until today!”

Redditor rejoiced at their new discovery.

“Henceforth let it be known that no more work shall ever be done again in a work environment!” Reddit user sheep_abducting_ufo exclaimed.

“Work environment dweller here,” another user named mastersprinkles said. “I can confirm that I was unproductive before this website came out. I’ll just be sneakier now. Commence with the sneakiness.”

In the end however, the site’s usefulness seems at least partially limited by that fact that many redditors can’t access it at work.