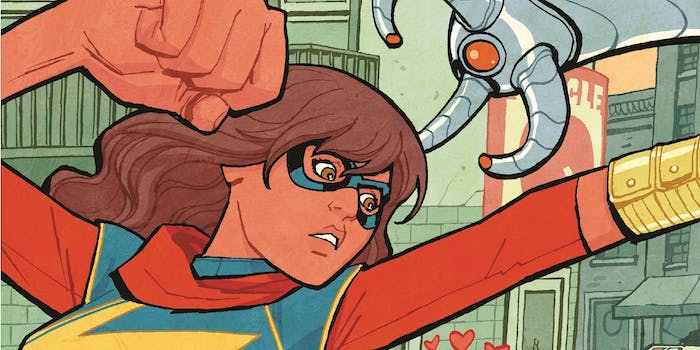 Vellani is the first true newcomer to headline a big Marvel project like this, a young actress with zero IMDb credits aside from Ms. Marvel itself. She’ll play one of the most popular new Marvel superheroes of recent years: a 16-year-old Pakistani-American Muslim who lives in Jersey City with her family, and has the ability to change the size and shape of her body. Ms. Marvel comics have the goofy, relatable tone of classic Spider-Man storylines, combining teen drama with superhero adventures.

Ms. Marvel is one of the second wave of Disney+ shows, along with She-Hulk (starring Tatiana Maslany) and a recently-announced miniseries starring Samuel L. Jackson as Nick Fury. Kamala Khan and She-Hulk will both be introduced via Disney+ (before appearing in future MCU movies), while the first four Disney+ shows are all headlined by stars of the Avengers franchise: Wandavision, The Falcon and the Winter Soldier, Loki, and Hawkeye.

Deadline reports that Ms. Marvel‘s full creative team is now in place. Bisha K. Ali (Hulu’s Four Weddings and a Funeral) is the lead writer, and the list of directors includes Adil El Arbi and Bilall Fallah (Bad Boys for Life), Sharmeen Obaid-Chinoy (who has won two Oscars as a documentary director), and Meera Menon (a filmmaker who has also directed several sci-fi/fantasy shows like The Magicians and The Punisher).

Disney+ hasn’t announced a release date for Ms. Marvel yet, despite the inaccurate 2021 timeline listed on IMDb. Marvel’s first Disney+ miniseries Wandavision will premiere this winter, with the next three coming out in 2021. So we probably can’t expect Ms. Marvel or She-Hulk to arrive before 2022.