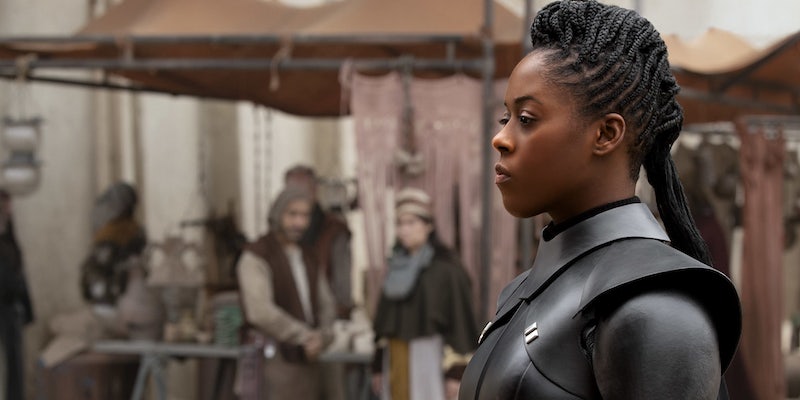 ‘There’s nothing anybody can do about this’: ‘Obi-Wan Kenobi’ actress Moses Ingram is receiving racist harassment

In a sadly predictable move for the Star Wars franchise, actress Moses Ingram is facing racist backlash against her role in the Disney+ show Obi-Wan Kenobi. Her experiences echo the toxic response to John Boyega and Kelly Marie Tran on social media—although this time Disney was more prepared, calling out racist fans and preemptively warning Ingram about what to expect when she took the role (a sad indictment of Star Wars fandom).

Ingram plays Reva Sevander/Third Sister, one of the show’s main villains. She’s an Imperial Inquisitor, a Jedi-hunter who works for Darth Vader. The first two episodes introduce her as an ambitious character with something to prove, rebelling against her snobbish boss in a dynamic that subtextually echoes real-life discrimination against a Black woman trying to succeed in a conservative workplace.

Following the show’s premiere, Ingram spoke up on Instagram Stories about receiving racist hatemail. She posted screenshots of comments including threats and racial slurs, accusing her of being a “diversity hire.”

“There’s nothing anybody can do about this,” she said, after explaining that she’d received “hundreds” of similar messages. “What bothers me is that there’s this feeling that I should shut up and take it… And I’m not built like that.”

Ingram mentioned in interviews that Lucasfilm warned her about the likelihood of harassment, saying she was told, “This is a thing that, unfortunately, likely will happen. But we are here to help you; you can let us know when it happens.” Learning from the hateful backlash aimed a John Boyega and Kelly Marie Tran, the Star Wars franchise is already voicing public support for Ingram. But as her Instagram post suggests, there’s still a sense of helplessness against the onslaught of toxic behavior online.

In a follow-up tweet, the official Star Wars account added: “There are more than 20 million sentient species in the Star Wars galaxy, don’t choose to be a racist.”

Ingram is receiving plenty of supportive comments, too, but there’s a noticeably negative trend in online discussions of her character. These comments typically criticize Ingram’s acting abilities or describe Reva as uniquely unlikeable or poorly-written. (Ingram, incidentally, is an award-winning Yale drama graduate who recently earned an Emmy nomination for Netflix’s Queen’s Gambit. Her breakout cinematic role was in Joel Coen’s The Tragedy of Macbeth in 2021. So those “bad actor” comments don’t hold much water.)

As is often the case in this kind of situation, many of these negative comments attempt to argue that race has nothing to do with the backlash, and they hate Reva for completely apolitical reasons. But when you compare the response to Reva with the response to her boss the Grand Inquisitor (played by a white man), the subtext is obvious.

Both characters follow familiar frameworks for Star Wars villains, with powers, motives and dialogue that echo common themes among Sith and Imperial characters. But while Reva attracted a deluge of intense criticism, fan reactions to the Grand Inquisitor are neutral-to-positive. Despite receiving similar amounts of screentime, the Grand Inquisitor also seems to provoke less discussion in general. Less than a week after the show’s premiere, this already illustrates how this type of racist backlash unfolds: Direct, explicit harassment aimed at the actor in question, coupled with a disproportionate wave of negativity disguised as “valid criticism,” scrutinizing details that would easily be overlooked in a white character.