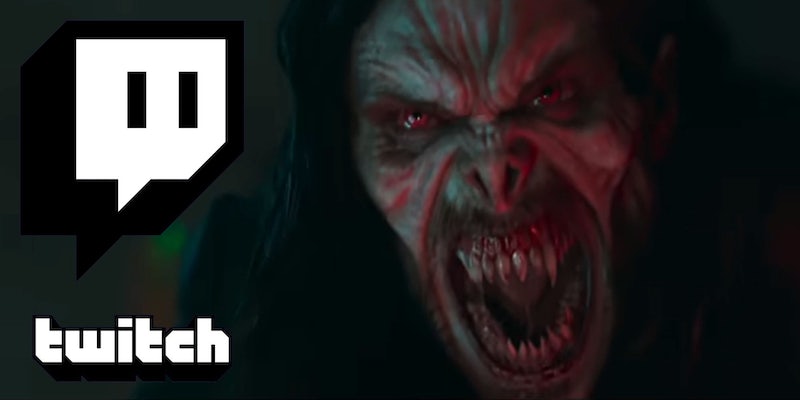 Morbius continues to stretch the limits of “any publicity is good publicity,” as fans (if “fans” is even the correct term here) gather in the thousands to illegally stream the movie on Twitch. The vampiric Marvel spinoff is definitely attracting more hype now than when it first came out, but we doubt this is what Sony Pictures wanted.

After earning dismal reviews and disappointing box office results, Morbius began to attract an ironic cult following—mostly poking fun at the idea of Morbius having a fandom in the first place. It’s become a unique example of reverse review-bombing, as fans spammed review sites with enthusiastic praise for stuff that doesn’t actually happen in the film. And over the past few weeks, Morbius’ (completely fake) catchphrase “It’s Morbin’ time” has gone absurdly viral.

Now, Morbius fandom has evolved from satirizing the idea that nobody watched Morbius… to actually watching Morbius.

The Morbius247 Twitch live stream arrived on Wednesday night, attracting thousands of viewers as it streamed Morbius on a loop. Unsurprisingly, the account has already been shut down for copyright infringement. However, at least two copycat accounts have sprung up since then, live streaming the movie to an adoring audience. At the time of writing, one has around 1,700 viewers while the other has around 600.

Morbius came out on digital release last week, theoretically just in time to ride this wave of ironic popularity. But despite the impressive volume of Morbius chatter on social media, it’s hard to imagine this particular audience making a dent in the film’s box office stats. Morbius shitposters aren’t the kind of people who pay $20 for a rental. They’d prefer to tune in to a random point of the movie during a pirated live stream and yell memes in the group chat.

Just as a reminder, Morbius cost around $80 million to make, stars an Oscar-winning actor delivering a deeply obnoxious immersive performance, and is supposedly part of the same franchise as Tom Holland’s Spider-Man. Despite the total cultural dominance of Marvel media, its main legacy is a parody catchphrase that someone invented on Twitter. Congrats to Sony Pictures on this unique result!