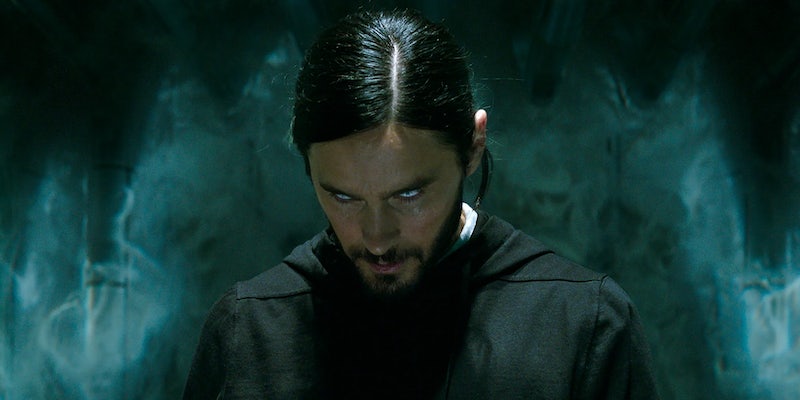 Everyone hates the actual movie—but the Morbius memes are more powerful than ever.

The summer of Morbius ain’t over ’til it’s over. With disappointing box office receipts and a sweet 17% rating on Rotten Tomatoes, Jared Leto’s vampiric Marvel spinoff is a certified flop. Its main cultural impact is a slew of self-referential memes about how much it sucks—and a month after Morbius’ release date, another one is taking hold: “It’s Morbin’ Time.”

Continuing the running joke of just making stuff up about Morbius because no one saw the movie anyway, “It’s Morbin’ time” is an imaginary catchphrase that’s currently going viral on Twitter. The phrase originated with a couple of viral tweets in early April, but it really began to spread in the past week.

In the wake of the unrelated Marvel movie Doctor Strange in the Multiverse of Madness, people began to invent fake Morbius crossover scenes, satirizing Marvel’s obsession with multiverse cameos. (Morbius’ own post-credits scenes are famously terrible, involving a nonsensical Spider-Man crossover that was allegedly edited to remove direct references to Spider-Man.)

Outside of the Doctor Strange jokes, “it’s Morbin’ time” is rapidly entering the extremely-online lexicon as a standalone catchphrase—and now it’s spreading to TikTok. Please give a warm welcome to this “POV: My gf when I text her ‘it’s Morbin time’” TikTok, which has racked up almost 150,000 views.

Meanwhile, there’s a handful of people out there innocently wondering if “It’s Morbin’ time” is a real line of dialogue in the movie. Considering Morbius’ reputation, that’s not a completely ridiculous assumption to make.