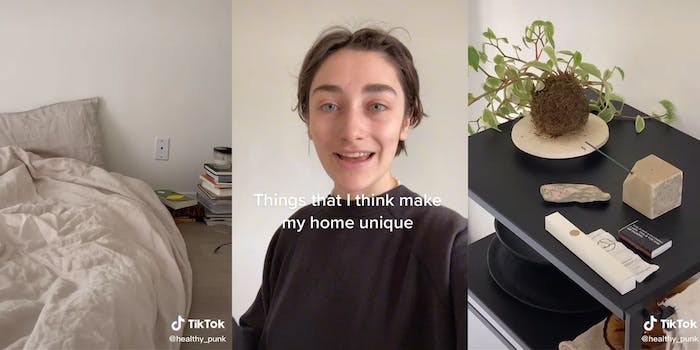 The home includes a chair that is not for sitting.

We’re all familiar with the stereotype of floor mattress guys; young single men who live in bare, undecorated apartments with a mattress on the floor and no bedframe. But what if that lifestyle was an intentional, curated aesthetic? That question was posed by design TikToker @healthy_punk, whose apartment tour went viral on TikTok and Twitter this week.

Describing themselves and their partner as “very much floor people,” they introduce a minimalist apartment furnished with floor cushions, a tatami mat with a futon instead of a typical bed, and stacks of books piled up against the wall with their spines facing inwards. The decor includes a black bag hanging from the ceiling, and a Rei Kawakubo chair (retailing at thousands of dollars) that “just holds knitwear” and isn’t for sitting. Is there a hint of self-aware humor to their description of certain details like “a vase I made that can only hold a single stem”? Maybe! Either way, this person’s unusual living space proved extremely divisive online.

As the video spread across Twitter, responses ranged from horror (“if I walked into this apartment I would assume I’ve been kidnapped and am being experimented on to discover the limits of the human psyche”) to respectful disgust (“glad they’re happy in their space. i seriously hate them though.”) There’s also a lot of commentary about the presence of a non-functional chair that costs thousands of dollars, highlighting one of the main criticisms of minimalist interior design: It only works for rich people.

Chic, uncluttered living spaces are a symbol of wealth and prestige, signaling that you can afford to invest in a few high-quality possessions and get rid of stuff you don’t currently need. This TikTok takes that idea to another level, echoing an image that we usually associate with poverty and carelessness: the floor-mattress apartment with little to no furniture. Basically, there’s a major class divide between a living space that’s empty for aesthetic reasons, and one that’s empty because you can’t afford to fill it up.

This kind of video is social media catnip; a subgenre of lifestyle content that can best be described as, “You live like this!?”

It’s irresistible for the same reason that people love to make fun of Gwyneth Paltrow and argue about leg-washing habits. But this TikTok is also suffering from having escaped from its natural ecosystem. @healthy_punk is a professional designer whose entire TikTok account is dedicated to architecture and design, mostly with minimalist or brutalist themes. They’re passionate about a very specific style, and so (we assume) are their 97,000 followers.

Would most people want to live in an apartment like this one? Obviously not! Couches are popular for a reason. But it’s not as if this TikTok is encouraging people to throw away their furniture and live in a monochrome box. It’s aimed at fans of @healthy_punk’s aesthetic, and ends with them advising viewers to “design your home how you want.” You do you!

Correction Sept. 3, 3:40pm CT: This article has been corrected to clarify that the TikTok video features a futon bed instead of a typical mattress.