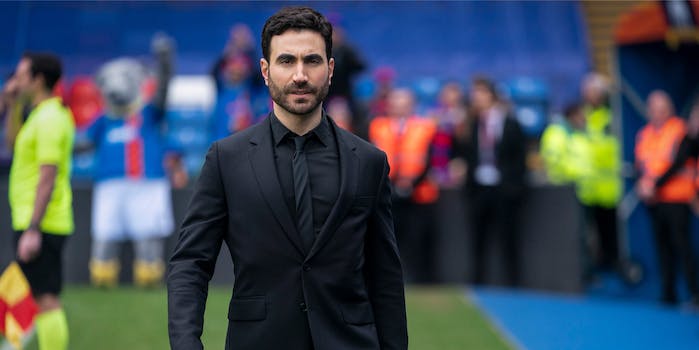 Roy Kent, AFC Richmond’s retired midfielder on the Apple TV+ original comedy Ted Lasso who’s portrayed by writer and comedian Brett Goldstein, is many things. Once a veteran footballer, he recently rejoined the team as one of its coaches; his fan chant reminds us that “he’s here, he’s there, he’s every-fucking-where.” He’s an absolute grump who communicates in grunts and growls and who isn’t afraid to curse anyone out—whether it’s Ted Lasso, his fellow pundits, or his primary school-aged niece Phoebe—to just about everyone’s delight (especially the audience). He’s something of a romance hero to his girlfriend Keeley Jones. But is Roy Kent actually CGI? A nearly year-old Reddit thread getting attention thanks to a resurfacing from Twitter posits that very question.

How did we get here? It’s because of several unrelated threads and tangents—along with mounting discourse around Ted Lasso season 2—that is a pretty succinct encapsulation of the internet.

Last September, toward the end of Ted Lasso’s first season, redditor cutterman1234 took to r/TedLasso with a very specific question.

“I just started watching the pilot, and i’m up to the scene where roy is called into teds office,” cutterman1234 wrote. “Am i crazy or does he look like a complete cgi character?”

Over several months, the post got a somewhat decent amount of traction as commenters were of a few minds. There were people who thought that cutterman1234 totally had a point and were happy that they weren’t the only people who thought that Roy Kent might be CGI. (“i swear he glows off the screen and looks like a halo character in movement and speech,” one person commented.)

Cutterman1234 also posed the same question on another /TedLasso post about whether Roy Kent was based on the retired footballer Roy Keane, whose name is far from the only similarity between the two. (For what it’s worth, Goldstein told Vanity Fair that there’s no truth to that connection and that he based Roy Kent on Oliver Twist’s “Bill Sykes if he hadn’t killed Nancy.”) Another person was in agreement, to which cutterman1234 offered the theory that Apple was testing out new technology with a CGI Roy Kent.

For months, theories or comments about whether Roy Kent is CGI were more or less a bunch of one-offs. According to the Internet Archives, r/TedLasso only had 2.2K members in September 2020 (when cutterman1234’s initial post went up), far fewer members than the 38.6K that it has now. The show was a word-of-mouth hit versus a slamdunk for Apple, and even among Ted Lasso fans, combing through old Reddit posts might not have been how they experienced the show or gotten into the fandom.

Cut to August 2021. Ted Lasso, once the underdog of TV, is now top dog. The show is airing its second season in the midst of an Emmy campaign where it’s considered a frontrunner. A very saccharine and polarizing Christmas episode that contained a lot of what people loved and hated about the show on steroids aired provided the launchpad for several threads, explainers, and think pieces for and against Ted Lasso season 2. What resulted was less of an insightful conversation and more a barrage of heated defenses of people’s points. It was pretty exhausting.

Over the weekend, Film Cred writer Guy Dolbey posted several screenshots from those original r/TedLasso posts to both poke fun at the level of Ted Lasso discourse brewing online already as well as showing something that’s even wilder.

“apparently it needs to be said that I don’t personally believe actor, comedian and writer brett goldstein is a digital character created for ted lasso,” Dolbey wrote in a follow-up tweet.

Dolbey’s tweet went viral both from people who genuinely believed that Roy Kent was CGI and those who couldn’t believe the ridiculousness of the post. And some pointed to how the Roy Kent is CGI conspiracy is a prime example that most people’s understanding of what CGI does and doesn’t do is terrible.

On Twitter, Goldstein posted a robot emoji in response to one person sharing an article about the Roy Kent CGI conspiracy.

In an Instagram Stories post that’s since been deleted, Goldstein donned a Memoji to further poke fun at the idea that he’s rendered CGI.

“I just want to clear up something once and for all,” he said. “I’m a completely real, normal human man who just happens to live in a VFX house and does normal human, basic things like rendering and buffering and transferring data.”

Ted Lasso is a show with a surprising amount of CGI in it. But no, despite all of his quirks and charms, Roy Kent is not one of them.