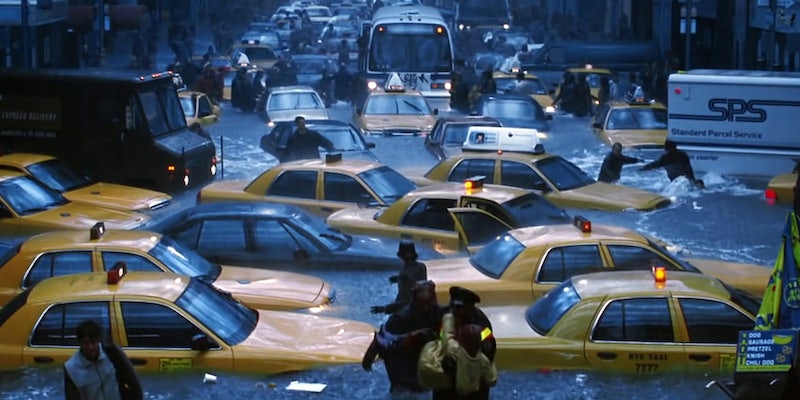 The city looked like a scene from a disaster movie.

New York and New Jersey were hit by flash floods in the wake of Hurricane Ida on Wednesday night, with both state governors declaring a state of emergency. Footage from New York City is particularly shocking, showing flooded streets, subways, and apartment buildings—and inspiring comparisons to the disaster movie The Day After Tomorrow.

Released in 2004, The Day After Tomorrow depicts a heavily fictionalized image of climate change, where catastrophic weather devastates New York City in a matter of days. First comes a tsunami of floodwater, followed by a new ice age. As one of the quintessential NYC disaster movies, some of its scenes now look disturbingly similar to real life.

Some of the scenes from Wednesday night can best be described as apocalyptic, as people attempted to drive or wade through the flood waters. Mayor Bill de Blasio warned New Yorkers to stay inside due to “record breaking rain across the city, brutal flooding and dangerous conditions on our roads,” but many were still stranded while trying to brave the storm. Eight people have been reported dead so far, and there are widespread concerns about the dangers of walking through contaminated floodwater.

Over the past decade, NYC has experienced an influx of extreme weather, most famously with Hurricane Sandy in 2012. This February saw the heaviest snowfall in the city’s history, and another storm resulted in floods this July.

Hurricane Ida was particularly devastating, highlighting two interconnected problems: The city’s failing infrastructure and the increasingly obvious impact of climate change. New York’s subway system is notoriously in need of maintenance, but it was also never designed to withstand this level of flooding. So while The Day After Tomorrow may be a corny movie that played fast and loose with climate science, the comparisons are wholly understandable. On Wednesday night, New York really did look like a scene from a disaster movie.