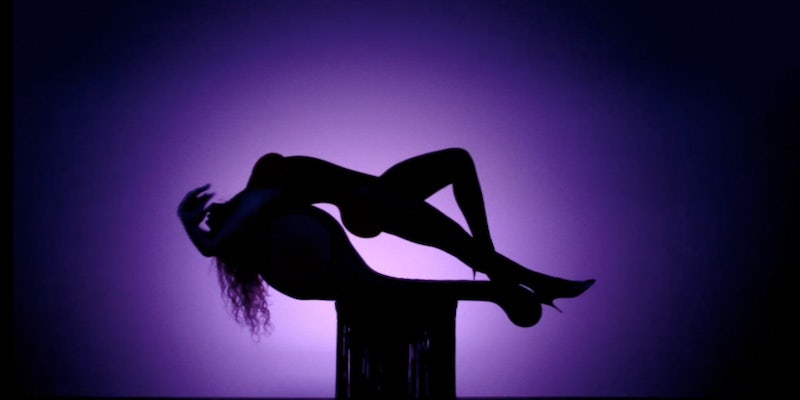 The Internet has not been happy with Mike Huckabee this week.

Appearing on The Daily Show Monday to talk about his amazingly titled new book, God, Guns, Grits, and Gravy, the former Arkansas Governor, presidential candidate, and Fox News mainstay got into an argument with host Jon Stewart about the right’s new favorite punching bag, Beyoncé. In his book, Huckabee alleges that the singer’s sexualized image is problematic, given her status as a role model for children.

“Beyoncé is such a mega-talent, she can do anything, she’s got the pipes to sing, she’s got the moves to dance, she does not need to be vulgar in order to set a trend,” he lamented to Stewart. “The thing that disturbs me, let’s say, about when you see Beyoncé, who’s a role model to young girls, young girls want to be like her. Do you know any parent who has a daughter that says, ‘Honey, if you make really good grades, some day when you’re 12 or 13, we’ll get you a stripper pole.’ Come on, we don’t do that in our culture.”

Stewart was understandably incredulous. “You’re diminishing Beyoncé in a way that’s truly outrageous,” he responded, and his reaction has since been echoed online. His concern trolling recalls Roxane Gay’s statements on this issue, and it seems Huckabee has yet to learn from their example. Gay wrote in the Guardian, “We have to differentiate between concern and concern trolling. We have to trust that women can be feminists, good role models and embrace sexuality.” Obviously, there’s a lot Mike Huckabee doesn’t get about Beyoncé, but his lack of understanding in this issue goes deeper that that. It goes all the way to the heart of personal responsibility.

Let’s get one thing out of the way right now: There’s no rule which says you can’t be a role model and a sex symbol. People are sexual beings, and fortunately for us, role models are just like the rest of us: people. Beyonce might seem like she lives on another, better planet, but she lives on this one, where we have libidos, urges, and marriages to maintain; she has to spice things up like the rest of us. (See: the “Partition” video.) Moreover, “role model” and “sex symbol” are titles which are often thrust upon people without any prior consent on the matter, making these statuses more about how we interpret their actions rather than how they see themselves.

That’s why it matters when women like Beyoncé are completely unapologetic about their bodies. It makes it easier for other women to do the same.

It’s not just that Beyoncé can’t be inherently sexual and a good role model at the exact same time; being so powerfully erotic is one of the things that makes her such a good influence on strong women everywhere. In a society that too often tells women their bodies are not their own—whether that’s Miley Cyrus or Amber Rose—it’s important to empower women owning their sexualities (especially black women). As Mychal Denzel Smith argues in Feministing, “whenever black women own their sense of sexuality and it appears to not be controlled by the hetero-male gaze, the whole world gets into a tizzy,” and that’s why it matters when women like Beyoncé are completely unapologetic about their bodies. It makes it easier for other women to do the same.

In a speech at last year’s Black Women in Hollywood luncheon, 12 Years a Slave‘s Lupita N’yongo spoke to the importance of having your own beauty recognized. “I remember a time when I too felt un-beautiful. I put on the TV and only saw pale skin,” N’yongo said. “I got teased and taunted about my night-shaded skin. And my one prayer to God, the miracle worker, was that I would wake up lighter-skinned.” When her prayers went unanswered, N’yongo explained that it was hard to even look at herself in the mirror; this is why she argued that black visibility is so important. Addressing young women, she said, “I hope that my presence on your screens and in the magazines may lead you, young girl, on a similar journey. That you will feel the validation of your external beauty but also get to the deeper business of being beautiful inside.”

Beyoncé would’ve never gotten where she is today by always playing by everyone else’s rules, and the fact that she continues to break boundaries is what makes her so necessary.

In addition to recognizing black beauty, there’s another reason we shouldn’t get so hung up on Beyoncé’s sexuality: She’s an artist, and artists should never be forced to kowtow their creativity to other people’s personal hangups. Beyoncé is a role model now, which is great, but she was a singer and a musician first, and her bold artistic choices and influence are why she’s so good at her job. Should an entertainer think about how they present themselves to the world when they reach her level of success? Probably. However, Beyoncé would’ve never gotten where she is today by always playing by everyone else’s rules, and the fact that she continues to break boundaries is what makes her so necessary.

Where does the responsibility for Beyoncé’s sexuality then lie? If parents like Mike Huckabee, who has two sons and a daughter, want to cover their children’s eyes and shield them from her, that’s their decision. Parents ultimately have to be the ones to decide whether they’re comfortable with their children listening to Beyoncé or not. If you are so concerned with your children listening to Beyoncé, then don’t let your children listen to Beyoncé. Why should it be her responsibility to cater to the whims and wishes of all Americans with children? This is just another way in which we unfairly police women: Not only do they have to speak for all of us, but they have to be safe for all of our kids. As Jada Pinkett Smith asked, “Whose body is this anyway?”

Forget what message Obama is sending to his children. What is Huckabee saying to his own?

While Huckabee seems pretty disturbed that President Obama lets his children listen to Beyoncé, he must not have considered the possibility that Sasha and Malia are mature enough to appreciate all that the singer has to offer, as a sex symbol, role model, and otherwise. As Stewart observed himself, Huckabee’s views on Obama’s kids are glaringly hypocritical, considering the fact that Huckabee had Ted Nugent on his show to sing “Cat Scratch Fever,” an extremely sexual song by any standards. In addition, let’s remember that Nugent has compared Muslims to dogs, said that Grateful Dead fans should be raped in prison, adopted a 17-year-old girl so he could have sex with her, and threatened to kill the president. Forget what message Obama is sending to his children. What is Huckabee saying to his own?

Surprisingly, though, Huckabee isn’t alone in decrying the influence of Beyoncé on women and children. In a panel discussion last year, influential feminist, activist, and author Bell Hooks referred to the singer as a “terrorist,” arguing that “the major assault on feminism in our society has come from visual media and from television and videos.” She continued, “From my deconstructive point of view…she’s colluding in the construction of herself as a slave … It’s not a liberatory image.”

Essentially, Hooks was calling Beyoncé a “bad feminist,” and Roxane Gay’s Guardian essay pushed back on that notion.” Gay wrote, “We have to believe that we can hold different points of view without labeling each other bad feminists. Feminism is not a free-for-all where anything goes, but I would like to think that feminism (in addition to helping women overcome oppression in all forms) allows for women to make choices, even choices with which other feminists would disagree.”

Mike Huckabee and Bell Hooks might seem like strange bedfellows, but they’re getting at something similar here. While Hooks might be correct to question how women’s bodies are being used by male patriarchy, we have to stop putting the blame on women, whether shaming them for their own power or assuming they are powerless over their own image, as Hooks does. Gay reminds us that “when Beyoncé wants, she rolls up the partition, so to speak,” and it’s time to stop endlessly questioning and critiquing every little thing she does. While no pop singer is beyond reproach, Beyoncé isn’t a bad mother, a bad feminist, or a bad role model for how she chooses to present herself to the public. She should have to answer to no one but herself, and we need to quit asking her to.