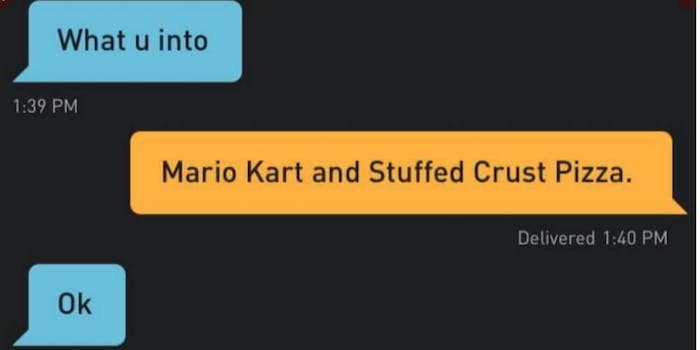 Men’s Humor, which caters to straight men, is being dragged on Twitter after unknowingly sharing a screenshot of a conversation taken from gay, bi, and trans dating app Grindr.

“Marry her,” the account tweeted, along with a screenshot of a conversation between two people who it evidently thought were both cis and straight.

“What u into?” the first messenger wrote.

“Mario Kart and Stuffed Crust Pizza,” the other responded.

Men’s Humor pushed the gag even a step further by tweeting, “Next question: What’s your ring size and preferred season for a wedding?”

Next question: What's your ring size and preferred season for a wedding? pic.twitter.com/fYqkw2rNZk

Then Grindr pointed out the screenshot is actually from its app. “Thank you for recognizing that trans women use our app,” the official Grindr Twitter account responded.

And while some tipped their hats to Grindr for its “wokeness,” others seized the opportunity to call it out for allowing the mistreatment of trans women to happen on its platform.

Another responded by saying that Grindr likely wouldn’t.

does this mean you’ll work harder to keep trans women safe on the app?

“No, thank you for allowing so much transphobia and fetishization happen on your app,” Twitter user @teaqueer wrote.

Grindr has yet to respond to the backlash that resulted from its trolling of Men’s Humor.