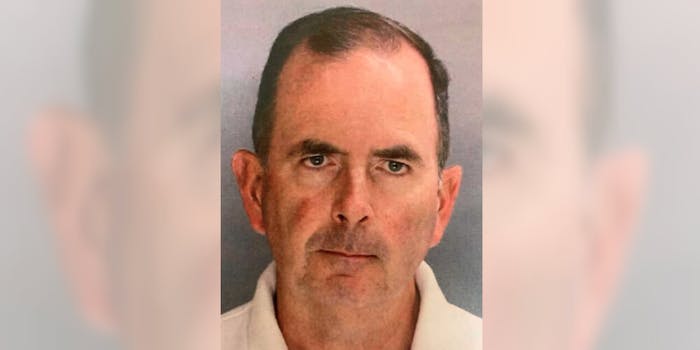 He allegedly stole almost $100,000 worth of church donations.

Listen up, priests—forget celibacy, forget the Catholic Church’s longstanding view that homosexuality is an abomination, and definitely forget any vows of poverty.

At least, that’s what Father Joseph McLoone was clearly feeling deep in his not-so-priestly bones when he allegedly stole almost $100,000 worth of church donations between 2011 and 2018. The monsignor proceeded to spend a bunch of that money on various boyfriends.

McLoone made some serious purchases, including a beach house in New Jersey, but apparently, as soon as he was caught with his hand in the proverbial cookie jar, he admitted he was also sending money to dudes he met on Grindr who he had “personal relationships” with.

In fact, investigators claim McLoone used J-Pay to send $1,200 to an inmate at a New York prison and another $1,720 to other guys he met through the app—all while doubling his own fees for the religious services he was performing at St. Joseph’s Catholic Church in Downingtown, Pennsylvania.

“Father McLoone held a position of leadership and his parishioners trusted him to properly handle their generous donations to the church,” a statement from the Chester County District Attorney’s Office reads. “Father McLoone violated the trust of the members of St. Joseph for his own personal gain.

OK, yes, obviously stealing is wrong and shouldn’t exactly be commended, but at the same time, if you’re going to steal money from the Catholic Church, you might as well be really ballsy and really gay about it.

And while far too many televangelists and conservative religious leaders are making serious bank playing off people’s fears and hatred of the LGBTQ community, you might even suggest McLoone was counteracting his peers’ bad behavior by acting as a sort of gay Robin Hood in a small, small way.

Whether you want to call it reparations, outreach, or good ole community building, if more priests and pastors want to start stealing money from the Catholic Church to give to the gays, well, there are definitely bigger problems in the world—and in the church.

As for Father McLoone, he was arrested Wednesday after an investigation spanning over a year, and the archdiocese issued a statement, detailing plans on pursuing full financial restitution.

“[Monsignor McLoone] acknowledged that some expenditures from this account were for personal expenses of an inappropriate nature,” the statement read. “Those expenses were related to relationships with adults that represented a violation of The Standards of Ministerial Behavior and Boundaries established by the Archdiocese.”