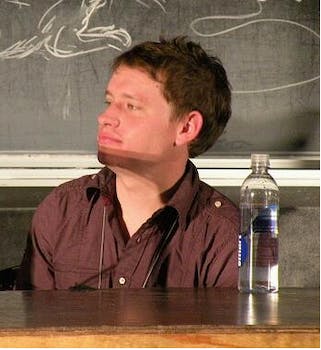 The Hater: Exposing the man behind @MensHumor

Turns out that the guy behind @MensHumor, an account known better for misogyny than mirth, also runs other offensive Twitter accounts.

I learn a lot of things on Twitter that titillate me but this morning’s timeline scroll thrust me into hater mode before I had my first cup of hater-roasted coffee.

The twerp behind the misogynistic Twitter feed @MensHumor has purportedly been revealed. @HumorForMens tweeted a screenshot of the domain-name registration for MensHumor.com, an apparently related site. The man behind the account? Jonathan Standefer.

Standefer’s LinkedIn page, which is no longer publicly available but was cached by Google, shows that he’s an Austin-based “business operator” who cofounded Lamebook.com, or Facebook’s unofficial wall of lame, and GladPost. GladPost’s homepage displays the logos of MensHumor and WomensHumor’s Twitter accounts. He’s also as tall as a bottle of Smart Water, @HumorForMens hastened to point out.

Standefer not only practices misogyny, but he also dabbles in racism and ageism!

Yeah, I viciously whipped my cane at the woman-hating Twitter stylings of @MensHumor a few weeks ago, but adding a face to my @MensHumor-themed dartboard makes hitting the bullseye so much sweeter.

Standefer’s Lamebook isn’t all that bad. I mean, it was mildly amusing when it came out in 2009 and there is nothing really offensive about it. Watching people make an ass out of themselves is a time-honored American tradition, thanks to America’s Funniest Home Videos.

There’s a big difference between Lamebook and Standefer’s Twitter accounts. With Lamebook, he would let the masses fall on their faces and gleefully highlight it. But with @MensHumor, someone gave him the misguided idea that his twisted thoughts are actually funny and he should capitalize on them.

According to the domain search conducted by @HumorForMens, Standefer registered the MensHumor.com domain name and most likely tweets from the corresponding Twitter account. We used the Whois search tool on InterNIC’s domain-name registry also, but it now comes up as private. But the date Standefer registered the website is the same in the screenshot: Aug. 15, 2011.

He also registered GhettoHikes.com, which has a Twitter account of the same name. @GhettoHikes is an offensive, racist account from “Cody” who leads hikes for “urban kids.” The tweets are essentially the 21st century version of the racist “blackface” films produced during the Jim Crow era.

@MCliches, another [email protected] Twitter watchdog, pointed out that Standefer’s abhorrently voiced Twitter accounts have spawned others that cross-promote each other, including @AmericanHumor and @OldManSearch. Sorry, there is no actual old guy named Norman searching for Regis Philbin’s black wife.

@MCliches also pointed that @MensHumor’s tweets extend beyond misogyny to plagiarism—like ripping this joke from the late comedian Mitch Hedburg.

“Menshumor is imploding in on itself. Its just a matter of time before people start mass-unfollowing. You can’t tell bad jokes and survive,” tweeted @MCliches shortly after.

Indeed you can’t. As Rainn Wilson learned for the second time, there is only so many offensive jokes that people will tolerate. (Answer: zero!) It seems Standefer, along with his family of distasteful and schizophrenically voiced Twitter accounts, doesn’t know when to stop.

So, Standefer, keep chugging that Bud Light of yours and keep your thoughts to yourself. No one wants to hear them.