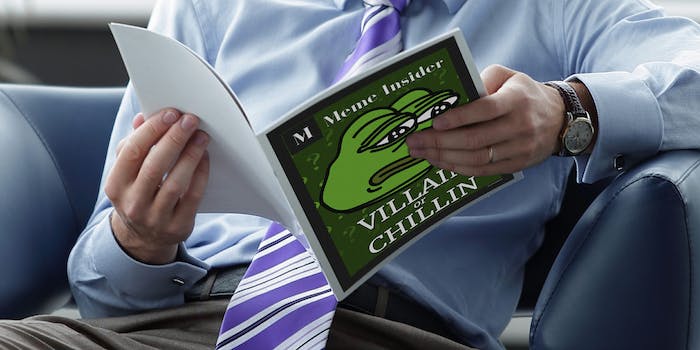 Inside Meme Insider, the first magazine for dank memes

What started as a one-off joke on Reddit has turned into a compelling monthly zine about the state of memes.

Why does the ting go skrrra? What’s the appeal of a monkey getting a haircut? And why is everyone saying “first of all?”

Memes, the little bits of humor that propagate across social networks and bleed over into real-life conversations, are as much a part of popular culture as TV or video games, but they can be totally inscrutable to the uninitiated. Major news outlets don’t even try to explain them, and when they do, they often get it wrong.

That’s why there’s Meme Insider. The monthly magazine provides the best coverage on the web of the fast-moving world of internet memes. Rather than aiming for timeliness and breadth of coverage, it discusses current meme trends in depth, explaining why various memes matter and what’s likely to come next.

Meme Insider started in November 2016 as a total joke. It was little more than a mocked-up magazine cover starring Joe Biden and promising articles about the hot meme issues of the day. (At the time, those were “Evil Kermit” and Donald Trump‘s victory in the presidential election.)

“I had nothing to do one night, so I decided I would make a joke magazine cover for r/MemeEconomy,” Meme Insider founder “Alex,” a.k.a DigitalizedOrange, told Reddit’s official blog. “I had no idea the post would actually go anywhere.”

Never underestimate the demand for reliable information about memes, though, especially in the Meme Economy subreddit, a forum on the social news site where people “buy” and “sell” memes like stocks. Redditors loved the Meme Insider cover and told DigitalizedOrange he should make it into a real magazine. Many even volunteered their services as “meme reporters,” copy editors, and the like.

“After receiving tons of support from the community, we put together a team to create the first issue,” the magazine’s editors told the Daily Dot. “Ever since then, our team of volunteers has been putting out amazing and consistent content on a monthly basis.”

By December, Meme Insider wasn’t just a joke—it was a real magazine. With a cover feature on frog memes. The internet had never seen anything like it.

Meme Insider is roughly 25 pages long and can be consumed each month in free digital form or as a paid print magazine. It’s too new to have an “institutional tone” like many newspapers and websites, and the cliches of meme writing have yet to coalesce. Some writers adopt the serious tone of a business writer, others the relaxed manners of a shitposting troll. As a result,  Meme Insider reads like a spicy mixture of an academic journal, a financial magazine, and Teen Vogue if it were curated by 4chan‘s notorious /b/ forum.

In its short life, the magazine has published meditations on the sociology of “woke” memes, the value of transgressive memes, and the question of whether memes can be art.

It’s run interviews with living memes like red sweater man Ken Bone and Robbie Rotten actor Stefan Karl Stefansson. And it has also stayed true to the metaphor of online meme spaces as a “stock market,” in which memes fluctuate in value like any other product, with in-depth coverage of the NASDANQ, a project to create a “real” stock exchange that tracks memes as their popularity rises and falls.

“Common sense tells us that for as long as the market value of memes rise and fall, the Meme Economy as a whole will remain relevant,” Meme Insider told us. “Even if ‘dankness’ loses its value in the future, there will always be certain qualities of memetics that are valued by the community. If we can use those qualities to trace the market value of memes … the Meme Economy will make sense in the long term.”

Meme Insider‘s articles offer the kind of thorough analysis you won’t find in tossed-off Reddit comments urging you to “buy” this meme or “sell” that one. Its writers give deep consideration to why some memes succeed and others fail.

Here’s just one example of Meme Insider covering ground that traditional media wouldn’t: In mid-June 2017, fidget spinners were suddenly everywhere. The toys, wildly popular with kids and young teens, had just reached the level of mainstream awareness that makes it seem like a fad has taken over the world overnight. But meme communities were sick of the spinners months before most people even knew what they were, and they’d started attacking the fad with humor.

In Meme Insider, a writer with the username Deros94 diagnosed their popularity as a symptom of “millennial self-hate.” The anti-spinner jokes, he argued, were a result of bitter millennial memers failing to grasp a trend that their younger counterparts enjoyed. Instead of admitting that spinners made them feel old and uncool, they decided the toys sucked, and branded them as “retarded” and “autistic.”

“In conclusion, the reason millennials were disgusted with the fidget spinner fad has to do with their self-reflection on their younger years,” Deros94 wrote.

Meme Insider‘s writers are mostly savvy denizens of the Meme Economy subreddit who hold down other jobs or academic careers while writing about the latest meme trends. Many of them are volunteers, but the magazine does have a core staff, which handles editing, design, and production. They take donations and sell print subscriptions via a Patreon page, and their next goal is to purchase a business license and start paying freelance writers.

“This is a BIG step for us as a company because all projections show this as the only stable future,” the magazine’s editors wrote.

It’s tough to run a magazine when your key people are mostly unpaid college students, as the Meme Insider team found out in April. A post on Meme Insider‘s Patreon page describes the sea of troubles they faced while working on that month’s issue: Their then-editor was moving across the country, the lead designer was dealing with a new baby, and most of the writing and design team was taking university exams.

Now, Meme Insider has three co-owners, they told the Daily Dot. Blake, a.k.a. “cartoonwarp,” is  “a California based graphic-designer and filmmaker who moonlights as a professional meme-trader.” Managing Director Noerdy handles the operations side of the magazine, and Brandon Wink, a.k.a. prominent r/memeeconomy poster “Luckycosmos,” serves as lead writer and editor-in-chief.

There are also several core staff members who, although they don’t co-own the magazine, make it possible every month:

Rounding out our non co-owner core team is Alexandra, (u/maybealexandra) who is our design director, has a passion for memes, and is currently getting a Masters in Information Systems Management, Micheal, (u/wickedassassin), a student who dabbles in web and software development, and finally Red McGreg (u/redriderx), who also hosts his own designs at redriderx.com.

DigitalizedOrange, who created the original concept of Meme Insider, remains involved “in an advisory position.”

None of these people, not even the owners, get paid. They dump any money they make back into Meme Insider. It’s a lot of work for little to no financial reward, so why bother?

For one thing, the contributors are serious wonks about memes. Their essays suggest an enormous amount of time spent producing, consuming, and thinking about internet culture. Even among the people who post in r/MemeEconomy, which is home to something like the top 1 percent of meme-obsessed people online, they’re a rare breed.

“We all want this project to exist. We will continue producing this magazine no matter the circumstances,” they told the Daily Dot.

Memes are finally starting to come into their own as a medium and a language for discussing culture and politics. The meme discourse of the 2016 election, which focused on a cartoon frog in a Trump hat, may have looked dumb and inscrutable to “olds,” but it was a far more sophisticated discourse than the lolcats and “all your base are belong to us” memes of a decade ago.

As new and uncomfortable as it sounds, memes are a core part of the way younger generations consume and evaluate information. They’re also an entertainment medium that’s even more democratic than YouTube and has the same potential for catchphrases and memorable characters as TV.

Someone’s got to try to make sense of all this, and attempts by “grown-ups” have thus far fallen flat. The mostly college-aged team behind Meme Insider represents the generation that can bridge the gap: They’re young enough to be conversant in the language of dank memes and old enough to approach them in an analytical fashion.

“Currently, we are focused on helping the different meme groups to know each other better through our varied articles, but the natural progression would be to scale ourselves up to larger sections of the internet, helping entire communities to better understand each other,” Meme Insider told the Daily Dot.

Meme Insider has done a lot of thinking about the future, both in terms of the magazine and of memes in general. They’ve watched as Tumblr became buried in “low-effort reaction GIFs” and sites like iFunny and FunnyJunk became landfills of derivative content from other networks.

“Their large user base makes it easy for everyone to post memes, from a nameless middle schooler, to a multi-billion dollar international conglomerate. Slowly, bright spots have emerged from Facebook’s ashes, such as Helo It Is I Jimbles Notronbo,” Meme Insider‘s staff told us.

Where to look for the next great meme depends on what you’re looking for, they explained:

Meme Insider’s ambitions seem to be growing along with the public appetite for memes. But given the limitations of its budget and the magazine format, there are still stories Meme Insider hasn’t been able to cover in the way it would like. The “Great Meme War” during the 2016 U.S. presidential election, which brought Pepe the Frog and the Egyptian god Kek into the spotlight as alt-right icons (and arguably helped elect Donald Trump), remains one such story.

“If we covered it, we would have to balance a thin tightrope. We aren’t here to make any political statements, but we can’t pretend that political motives weren’t a part of the meme war. It had real implications on the ‘real world’, with some still being felt today, so the story would probably begin to look less and less like a standard Meme Insider article, and more like something out of an AP History book,” the staff told us.

“We’ve talked about covering that story for a long time, but we would want to do it right if we were ever to tackle it.”

If anyone can explain that memetic mess for a general audience, Meme Insider can.