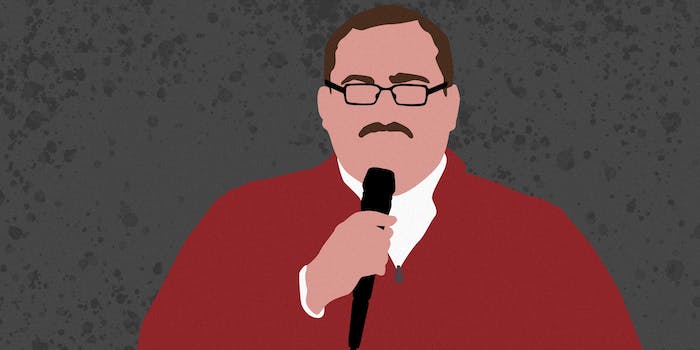 R.I.P. Ken Bone, the man who memed too close to the sun

No human can stand up to the scrutiny that comes with memehood.

A week after charming America at a presidential town hall debate and becoming a meme, red sweater man Ken Bone‘s stock suddenly plummeted. He called attention to an old Reddit account, with a history of unfortunate comments left public for anyone to see. Who could have seen this coming?

It’s happened time and time again to previously private human beings who take on the pseudocelebrity status of memehood. As soon as the harmless-seeming, mustache-bedazzled Bone found himself in the national spotlight, people predicted his downfall by comparing him to another fly-by-night human meme everyone now hates: Chewbacca Mom.

We have officially entered Chewbacca mask woman territory. Excited to see this guy sell glossy 8X10s next to Virgil. https://t.co/JYZdZcHay2

Calling it now; Ken Bone is the new Chewbacca Mom and the public will have turned on him within a month of the election

Chewbacca Mom‘s childlike delight in playing with a talking Chewbacca mask seemed like a little sunbreak of joy in this darkly clouded election season. She immediately raked in rewards from mask-maker Hasbro and from Kohl’s, the store where she bought the mask.

But Chewbacca Mom, real name Candace Payne, overstayed her welcome and tried to capitalize further on what was ultimately a one-off stunt. And the more people learned about her, the less they liked her. When she sang “Heal the World” on YouTube after the killing of five Dallas police officers, she had officially jumped the shark. At least she made a reported half a million dollars doing it, I guess.

The parallels between Bone and Payne are clear: Both received a tremendous amount of unasked-for adulation and scrutiny, and both figured they might as well capitalize while they could. Payne did PR for Hasbro, Bone endorsed Uber and sold T-shirts with his face on them.

That’s fine. Memehood is a shitty deal, and it’s understandable that those afflicted by temporary fame would want to hook up with corporations to mutually exploit it. Even if you hate the spotlight, this is smart: There’s no better way to make a meme vanish than to profit from it.

The problem is that these memes—these caricatures onto whom we project our hopes, fears, jokes, and assumptions—are people. When the mask or the red sweater comes off, we’re confronted with their Reddit histories, personal lives, and views on race and religion.

In Bone’s case, we found out he believed the killing of Trayvon Martin was justified, enjoyed looking at leaked photos of Jennifer Lawrence’s “butthole,” and claimed he once committed insurance fraud to keep a job. All of that information had been on Reddit for years before the bizarre condition of memehood gave us a reason to care.

His posting history is pretty gross, yes, but it’s also barely noteworthy in the broader context of Reddit. The site has thousands (maybe tens of thousands) of regular users who identify as proud misogynists and white nationalists. Not to excuse anything Bone wrote, but if he’d been on the other side of these arguments—expressing support for Black Lives Matter and staunchly opposing leaked celebrity nudes—he’d be under attack by a different segment of internet users. He was doomed from the moment he became famous.

Even the legitimate celebrities, those we venerate for better reasons than “has a dumb sweater and mustache” aren’t immune to this. When popular culture turned Ruth Bader Ginsberg into the superheroic “Notorious R.B.G.”because of her history of good Supreme Court decisions, it was setting her up for a fall the moment she inevitably said something disagreeable. Recently, she called NFL quarterback Colin Kaepernick’s protest of the National Anthem “dumb” and “disrespectful.” Now everyone’s throwing their Notorious R.B.G. t-shirts onto the same bonfire that would be burning Ken Bone tees… if they’d even shipped yet.

When a historically great Supreme Court Justice can’t live up to the scrutiny of social media in 2016, what chance did a dumb Bone ever have?

A non-human meme, like Pepe the Frog, can be whatever we make it. Pepe has been an every-frog and a white supremacist, depending on who’s posting him. His symbolic meaning is entirely up for debate. Sure, his creator can weigh in with some authority, but Pepe himself isn’t a living person who can clarify his own views.

Ken Bone is, and can, unfortunately for Ken Bone. R.I.P., internet’s erstwhile buddy. You were a pleasant diversion from the grim reality of misogyny and sexual harassment that’s—finally—starting to define this election. People needed a release valve for all this tension, but praising your fashion choices and then forensically analyzing your sleazy online footprint can’t make the election go away.

You weren’t the first Ken Bone, and you won’t be the last. As long as making people into memes is a fun pastime, picking them apart and watching them burn will be, too.

Now we leave you with your very bad opinions and your Uber money, and return to confronting the real issues.