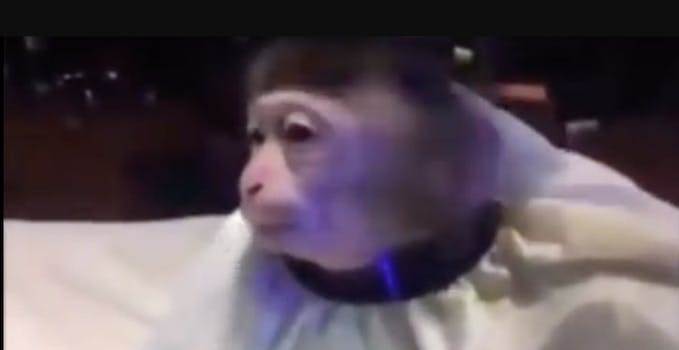 Monkey getting a haircut proves anything can be a meme

This snazzy monkey is taking over the internet.

Huge memes can come from some unlikely places: if the content is good, people will share it, no matter how obscure the source. Case in point: this YouTube video of a macaque monkey getting a fresh haircut. It may only have 60,000 views since February, but it’s inspired a gaggle of ridiculous Photoshops that have been seen by many, many more.

The general pattern of the meme is to cut out the monkey and the barber’s arm and insert them into another photo so it looks like someone else is delivering the haircut. Someone like … Donald Trump.

Or Cyborg from Teen Titans:

or the guy from that infamous CTRL+ALT+DEL “Loss” comic:

Or Lil Meatball, the “yeet” kid:

Or these thug cats from Tom and Jerry:

The monkey doesn’t seem to have any particular meaning, it’s just an internet non-sequitur. It’s a meme whose only real purpose is to hijack other memes. But that doesn’t prevent it from being funny: it’s a monkey getting a haircut.

As the monkey meme matures, creators on Reddit have started experimenting with it a little bit more. In this example, the monkey is now the barber:

And in this one, it’s hair-cutting monkeys all the way down:

Still, this well-coiffed little dude has much more untapped potential. His ability to slip into any meme makes him an extremely versatile character, but his utter lack of meaning or context keeps him from being too attractive to mainstream meme consumers, who tend to prefer references to pop culture and current events. Because the monkey is so unlike most of the memes that have emerged recently—often of the fill-in-the-blank “exploitable” variety—it’s hard to say whether he’ll disappear quickly or become iconic. Whatever happens, though, he’s gonna look fly.