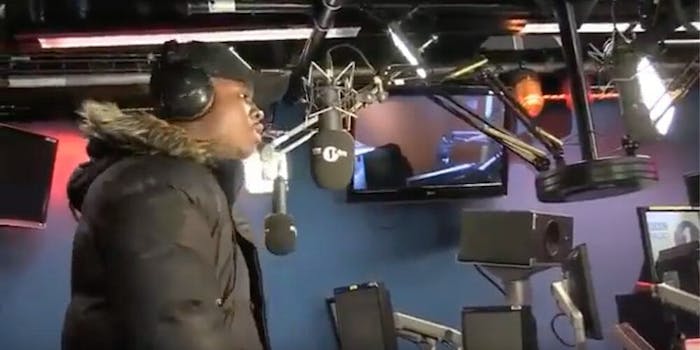 'Big Shaq' is the next big thing in memes.

U.K.-based comedian Michael Dapaah does an over-the-top rapper character called Roadman Shaq, but his joke MC is turning out to be a genuine hit. “Big Shaq” first entered the spotlight when he freestyled on BBC radio’s Fire in the Booth, dropping two instantly quotable gems. The first was “the ting go skrrra pap pap ka ka ka skidiki,” a mess of a gun-sound onomatopeia, and the second was “I tell her man’s not hot, I tell her man’s not hot / The girl told me, ‘Take off your jacket’ / I said, ‘Babes, man’s not hot.'”

“The ting go” and “man’s not hot” have both become huge memes in the U.K. since that freestyle in August. Even U.K. Labour leader Jeremy Corbyn, beloved by left-wing memers as “the absolute boy,” has gotten in on the Man’s Not Hot meme. Here he is at the Labour Party Conference, declining to take off his jacket:

Jeremy, don't you wanna take off your jacket?"
"Man's not hot"
🚨🚨🚨 pic.twitter.com/m4cC0DywHi

Now Dapaah’s webseries featuring Big Shaq, Somewhere In London (#SWIL), is taking off, and he’s released a more polished version of “Man’s Not Hot” as a single. The lyrics are ridiculous, but it sounds surprisingly good.

In September, Roadman Shaq started to cross over into the U.S. meme scene, leading to a global explosion of “skrrra pap pap ka ka ka” in both text and video form. It’s also the rare meme that has traction on both Twitter and Reddit.

me: gently adds fries into the pot
the oil: https://t.co/GtvnYLNRit

I EDITED THE POWER TEASER SO THAT IT WAS 'the ting goes' GUY PLAYING AS THE AUDIO AND I REGRET IT ALREADY pic.twitter.com/dit0gN1wCJ

John Wick but for every gunshot the ting goes POPPOPPOP. pic.twitter.com/uCfi0HBJbV

Over on YouTube, the song has been remixed by popular memer Grandayy, who helped put huge musical memes like “We Are Number One” and “Shooting Stars” on the map.

And he’s not the only one doing it:

What makes this such a good meme? Its catchphrase appeal across networks and formats is undeniable, and the fact that it started as a video gives it the potential for very elaborate and very funny remixes. But, above all, it’s just that Big Shaq is a good character. He’s a goofy version of grime MCs like Giggs and Skepta, whose style has been huge in the U.K. for years, but who recently found a new North American audience with the release of Drake’s More Life mixtape. (Drake co-opted grime’s slang and delivery, and featured Giggs himself on two tracks.)

Dapaah isn’t the first black U.K. comedian to conquer the American meme landscape this year. Back in February, Roll Safe, a typical London character created by actor Kayode Ewumi, became one of the hugest memes of the year. Americans may not have been familiar with the type of guy Roll Safe was spoofing, but the core of the joke was culturally universal: a guy who thinks he’s smart but actually knows nothing. The same seems to be true of Big Shaq: You don’t need to know anything about grime MCs or U.K. rap to find the staccato sounds of “the ting go skrra” hilarious. And anyone can laugh at the macho guy who pridefully refuses to remove his jacket because “the man’s not hot.”

When U.S. memes get too stagnant and mired in current events, look to the U.K. for the next big thing. Hey, it worked for Drake.