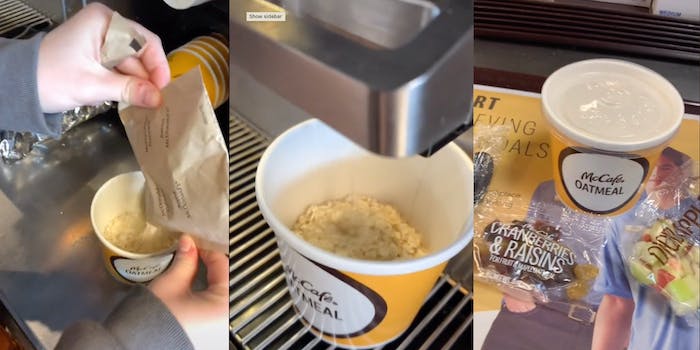 ‘If anyone was wondering, it SLAPS’: McDonald’s worker shares how the oatmeal is prepared in viral TikTok

If you’re a fan of McDonald’s oatmeal, you may be a little surprised to find out how it’s prepared.

In a now-viral TikTok, user @mcdonaldscreations—an account that shows the behind-the-scenes action at the chain—revealed how the popular breakfast food is made.

In the video, the TikToker grabs a prepackaged packet of oats and pours it into a cup. Then, they add what looks like water and creamer to the cup before sealing the container. According to McDonald’s website, the oatmeal is served with apples, cranberries, and raisins.

The video has more than 2.6 million views on TikTok and over 1,000 comments.

Other users similarly commented that they were fans of McDonald’s oatmeal.

“I swear they put crack or something in their oatmeal,” commented another TikToker. “Why does it taste so good?! But at home I’m like, ‘Nah, I don’t want to make oatmeal.’”

“Best oatmeal ever, def worth it,” another viewer said.

“McDonalds oatmeal is so good,” commented another user.

Of course, this isn’t the first time McDonald’s has been “exposed” for how employees make the chain’s food. In November, another TikToker seemingly exposed how McRibs are stored; in February, another alleged employee revealed where the restaurant’s signature onions come from.

The Daily Dot has reached out to @mcdonaldscreations via TikTok comment.