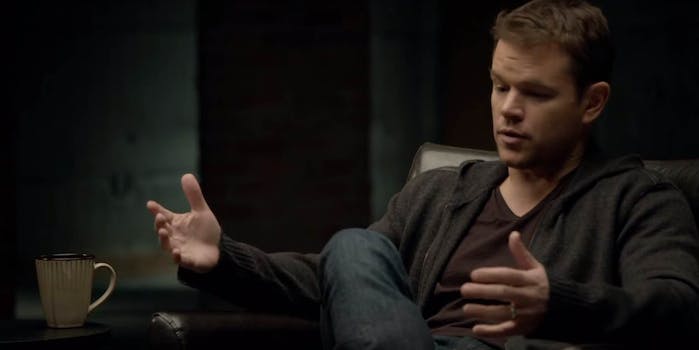 White men know all there is to know about diversity

Let's just leave all the work to Matt Damon and Vanity Fair. They know best.

Let’s just all take a moment and give a round of applause to all the white men who benevolently offer their wise counsel to women and people of color on matters of diversity.

Without their wisdom and tireless efforts, television and movies today would be nowhere close to portraying the realities of Americans from all walks of life. And the people leading most productions, networks, studios, and awarding organizations reflect the spirit of that commitment.

In reality, it’s a hollow, apathetic spirit. Even as people from underrepresented communities highlight the persistent pitfalls in representation, both in front of and behind the camera, the industry still finds a way to congratulate itself for a job well done. And so much so, it will trick the public into believing that it’s listening and truly committed to giving everyone a fair seat at the table—even when the same white men running the show keep the seats reserved for members of their boys’ club.

It’s what explains the audacity of both Matt Damon and Ben Affleck’s Project Greenlight, and a Vanity Fair feature that heralded “Why Late Night Television Is Better Than Ever.” Within the same week, both platforms managed to put white men front and center in conversations about inclusion, diversity, and equity in the media. They not only glossed over ongoing problems, but did so while talking down to and over women and people of color who have long forced the issue.

And the message was clear: It’s OK to include narratives about people of color and women, as long as white people (especially men) remain in complete control.

@VanityFair It took me a while to realize there are 2 people of color (I assume Trevor Noah is at least slightly black) in the picture.

In one instance, Damon—a rich, industry-backed, white male screenwriter and producer—dared to dictate to an experienced Hollywood producer (and a black woman) how to handle issues of diversity in the filming process. “When we’re talking about diversity you do it in the casting of the film not in the casting of the show,” he said, after Effie Brown points out a glaring problem with how a sole black character is portrayed, and why it’ll be crucial to hire a culturally competent person to direct it. It’s something any wise manager might want to keep in mind, especially when the only black character in a project is a female prostitute being slapped by a white pimp. But as Jezebel’s Kara Brown notes, Damon dismissed Brown’s appeal, essentially saying “that they don’t have to hire any diverse filmmakers on Project Greenlight as long as they throw a few women and black people onscreen.”

Even though women and people of color make up roughly half the population, each distinct group represents only 16 percent of late-night hosts.

And in Vanity Fair, longtime contributing editor David Kamp praised the revitalized “mix of new faces, shows, and platforms,” following recent seismic shifts in late-night televisions lineups—notably as Jay Leno, David Letterman, and Jon Stewart took their final bows, and Stephen Colbert moved from cable to network. To Kamp’s credit, he noted that women are “conspicuously missing” from late-night TV, even with Samantha Bee’s impending debut on TBS and Chelsea Handler’s move from E! to Netflix. But even so, the optics of the headline and the photo of late-night hosts (with Bee and Handler not included) spoke volumes on social media—late-night television still isn’t so great if you’re a woman or a person of color.

The latter of both categories was nary mentioned in the story, but if we’re counting all 12 hosts, something is clear: For two groups that make up roughly half the population, they each represent only 16 percent of late-night hosts. It’s a fact that wasn’t lost upon the likes of CBS, NBC, Comedy Central, or any entertainment journalists in recent years, when the Internet made it abundantly clear that it was time to break up the white male stranglehold on late-night hosting slots (and writing staffs).

But for now, this is how diversity works in America. White men continue taking the lead, even when they’d probably be better off taking more of a seat—and working with the leadership of women and people of color

Matt Damon is so ignorant. How could he interrupt the only black person in the room, yet alone a woman to explain to her what diversity is?!

To be clear, white men and women aren’t monolithic social categories, and there’s diversity within those ranks as well. For example, a gay white man who isn’t trans will likely have different career, education, and life experiences when compared to a heterosexual, white woman. In either case, both parties have a different set of privileges and limitations based on gender and sexuality.

At the same time, both groups have one thing in common: they’re still white. And as a result, of no fault of their own, they just won’t be as privy to the experiences of people of color beyond whatever they’re able to learn.

White people just won’t be as privy to the experiences of people of color, beyond whatever they’re able to learn.

Even though Handler and Bee are now the standard bearers for women in late-night TV, which is a step up for gender diversity, both women are still white. Reportedly, Amy Schumer turned down a Daily Show hosting gig, satisfied with her current show and because it didn’t feel like the right fit. Yet for women of color, who live at the intersections of race and gender, there is no late-night host who looks like them, and relatively few major films where they’re running the show.

Notably, the Daily Show‘s Jessica Williams quieted the online cheers for her to replace Stewart, emphasizing that it’s not the job she wants, and of course it’s her prerogative. But that she was easily identified as a qualified alternative, and one that wasn’t white nor male, suggests that audiences want more diversity in late-night TV, not less. Within the past two years, many black women (and their allies) pressed hard for Saturday Night Live—weekend late-night television if you will—to stop putting black men in drag after Maya Rudolph’s departure and actually hire black female comedians. The push culminated in roles for Leslie Jones and Sasheer Zamata. (Nasim Pedrad, an Iranian-American comedian on the cast for five seasons, left shortly after to pursue other projects.)

But if we’re still following Matt Damon’s logic—in which he knows better than an experienced black female producer—the only diversity focus necessary comes through how film roles are cast, not who’s directing, writing, producing, or even green-lighting projects.

The status quo isn’t solving the problem. Although inclusion and diversity translate to various historically underrepresented and marginalized groups. Yet in the context of entertainment, even with some measurable advances along the strict lines of gender and sexuality, race remains perhaps the most salient marker of the disproportionate power and privilege held by white men (and some white women) in power.

No amount of self-education in the world is a replacement for one straightforward, yet seemingly Herculean task: Hire diverse people of color at every level, in front of and behind the camera.

But based on the prevailing reasoning on the issue, all it takes is affirming the leadership of expressly (or aspiring) progressive white men who think they know a thing or two about issues of diverse representation. As far as how women and people of color are represented, it’s by incorporating their issues—as filtered through mostly white male staffs—whereas a few people from either group get hired in visible roles for optics. But many of those immensely powerful men have no idea about how to truly include marginalized perspectives, or engender more access and equitable division of power in the industry.

No matter how well-intentioned, the mostly white male late-night hosts, film producers, and directors can’t rely on their thoughts alone to substantively address ongoing issues of inclusion. No amount of self-education in the world is a replacement for one straightforward, yet seemingly Herculean task: Hire diverse people of color at every level, in front of and behind the camera.

And when there’s a discussion about diversity, remove white maleness from the center.