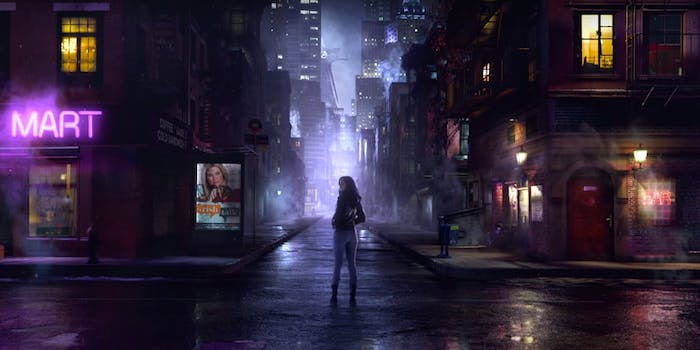 A spoiler-free review of the first ‘Jessica Jones’ episode

Marvel had more than just a few clips to show fans at New York Comic Con.

David Tennant may have only teased a scene in a prerecorded message, but Marvel showed the first episode of its upcoming Netflix series Jessica Jones to a full crowd at New York Comic Con Saturday night, and it easily crushes expectations.

When the audience at Main Stage 1-D found out they would be among the first people to see the new show, they went wild. Marvel Studios, which is so secretive about the MCU that many of the actors involved have a running joke about “Marvel snipers,” normally only brings a trailer or some clips for fans (or the next episode of a show like Agents of S.H.I.E.L.D.). But bringing the first episode of a series that hasn’t even had a full trailer with scenes from the show was practically unprecedented.

We’ve seen Jessica Jones, the former superhero turned private investigator, go about her day through a series of short clips. We got our first glimpse of Tennant’s Kilgrave, and Marvel even released a free Jessica Jones prequel comic reuniting Brian Michael Bendis and Michael Gaydos, the duo that created the story that inspired the TV show. But the first episode, which was written by Melissa Rosenberg and has the approval of Bendis himself, truly brings Jessica to life. It’s dark and sexy, laugh-out-loud funny, and at times even terrifying.

Jessica Jones already gives off the vibes of a film noir both from how the episode progresses and the voiceovers from Krysten Ritter, who is absolutely phenomenal. Unlike many other superhero films and TV shows, the darkness isn’t in the lighting, which has plenty of purple hues—a likely reference to Purple Man, a name Kilgrave used in the Alias comics.

Jessica is strong and cunning and flawed and damaged—and those aren’t mutually exclusive. She’s great at her job, has some unhealthy coping mechanisms, curses like a sailor, and fucks up just like everyone else. She’s allowed to be human.

Although they’re not featured as prominently, the other female characters, most particularly Trish Walker (Rachael Taylor) and Carrie-Anne Moss’s Jeryn Hogarth—Marvel revealed at the panel that Moss was playing a genderbent version of the character in the comics, who has ties to Iron Fist—both brilliantly bring complicated characters to life. It’s as much a reflection of the actresses involved as it is Rosenberg’s script. At the panel, Taylor in particular praised the role of female friendship in the show, and even early on it’s evident that it will shine through.

TV fans might not yet know what exactly Kilgrave did to Jessica (something we’ll probably learn more about as the season progresses), but we will know the effect he had on her. We can feel the anxiety and terror that Jessica feels whenever his memory creeps up on her when she’s not there. And the show is willing to go dark and twisted in ways that Daredevil hasn’t even touched yet.

Luke Cage (Mike Colter) is a highlight in an episode that mostly focused on Jessica. Ritter and Colter have excellent chemistry, and we could easily watch a whole show of Luke and Jessica doing something mundane like discussing the phonebook.

The first episode easily had us wanting more. But as for the rest of the first season?