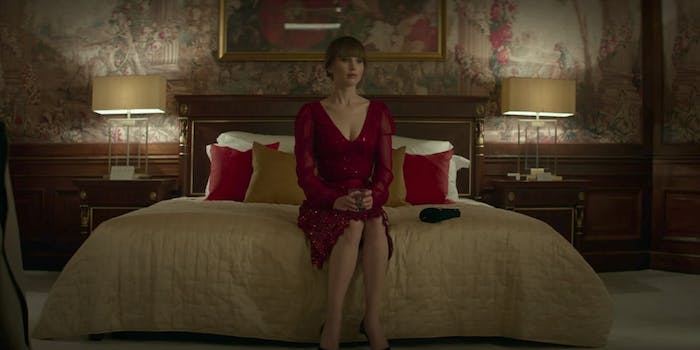 ‘Red Sparrow’ is the sexist ‘Black Widow’ movie nobody asked for

It might have been a fun, cheesy spy thriller, if not for all the sexual violence.

If Marvel had done the smart thing and greenlit a Black Widow movie years ago, we wouldn’t have to deal with Red Sparrow. Based on a 2013 novel by former CIA operative Jason Matthews, its heroine is suspiciously similar to Scarlett Johansson‘s Natasha Romanov. Both are trained ballerinas. Both attended abusive boarding schools for Russian spies. Both use seduction and manipulation to achieve their goals, and both were crafted entirely by male filmmakers.

In the annals of spy movies, Red Sparrow is too corny to be taken seriously like Tinker Tailor Soldier Spy, and too traumatizing to be a fun romp like 007 or Atomic Blonde. If they removed some of the sexual assault scenes, I’d be more forgiving. But you get the impression that for director Francis Lawrence and writer Justin Haythe, sexual assault was kind of the point. Former ballerina Dominika (Jennifer Lawrence) becomes a spy to earn medical treatment for her ailing mother, but their relationship barely receives any screentime. It’s just an excuse to kickstart Dominika’s arc from sexual victim to empowered superspy.

As a rule, if your depiction of sexual violence resembles a lingerie commercial, it’s time to go back to the drawing board.

Set in the present day, Red Sparrow has a lot in common with Cold War thrillers. Matthias Schoenaerts stars as Dominika’s sleazy uncle, who recruits her into the Red Sparrow training program. There, she learns seduction techniques from matronly supervisor Charlotte Rampling. “You sent me to whore school!” Dominika exclaims in a later scene, proving that Red Sparrow missed its true calling as a camp classic. (Other highlights include the line, “Your body belongs to the state,” and Mary-Louise Parker’s scene-stealing role as a boozy American diplomat.)

Dominika’s first assignment is to befriend CIA agent Nate Nash (Joel Edgerton), who knows the identity of a mole in the Russian government. Their complicated dance of double-crosses will keep you guessing, but they suffer from a lack of chemistry. What does Nate Nash offer Dominika, other than his predictable role as The Only Compassionate Man? And what does Dominika want? Her characterization is oddly thin, and during Red Sparrow’s 140-minute runtime, my thoughts drifted to Jennifer Lawrence’s last two roles.

After Passengers and mother!, Red Sparrow is the third film in a row where Jennifer Lawrence plays a character with virtually no personality on the page. In mother!, she’s the archetype of a passive young woman trapped in a relationship with a self-absorbed older man. In Passengers, she’s a “writer” who dresses like a 40-year-old millionaire and unconvincingly falls in love with her stalker. In Red Sparrow, she’s a cipher who learns to work the system after surviving physical and emotional torment. These characters are essentially scream queen roles—women whose main job is to react to extreme circumstances. But Jennifer Lawrence isn’t a scream queen. She’s a dramatic actor with brilliant (and generally under-utilized) comedic instincts. And apparently terrible taste in scripts.

Red Sparrow isn’t a trainwreck on the same level as Passengers. If you can stomach the sexual violence, then it’s a decent (if rather unoriginal) spy story with some entertainingly hammy supporting characters. But do we really need another movie where abusive men shape the female lead? Doubtful. Especially not from the perspective of male filmmakers. It’s also a rather depressing follow-up from Francis Lawrence, who directed the last three Hunger Games movies. Katniss Everdeen was a much more thoughtful examination of a young woman being dehumanized by her government, both as an objectified beauty and later as a military operative. The Hunger Games actually had something to say, whereas Red Sparrow is just the latest in a hopefully dying breed of rape thrillers.