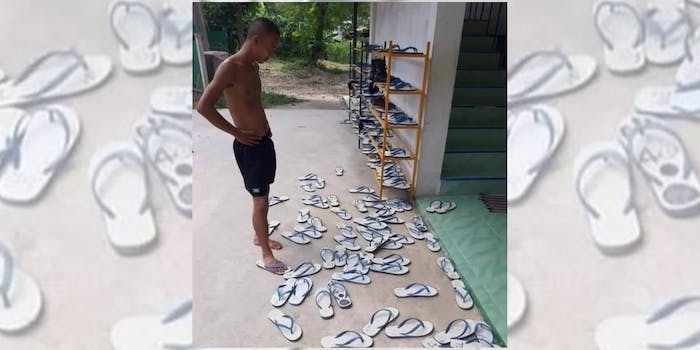 'What happens when you all buy similar pairs of slippers.'

The end of 2019 is quickly approaching, which means it’s almost time to determine the best meme of the year. Even as we enter the start of November, new contenders are throwing their hat into the ring. Like a viral image of a man surrounded by a large number of similar-looking flip-flop sandals scattered on the ground.

The image originated on the /r/Wellthatsucks subreddit on Oct. 27. The image was posted by Reddit user @SirMalcolmK. The next day, Twitter user @theNitinWalke tweeted the image and posted it with the caption, “She: I talk to you only.. * When you check her DMs. *”

The tweet now has 205 retweets and 790 likes. Since it’s spread around, other Twitter users have created their own variations on the meme. It’s an easy meme to create since all you have to do is take the image and add your own caption to the tweet before hitting send—you just need a good one-liner.

Many of the variations of the meme follow a theme of having an abundance of similar-looking items and being unable to differentiate between them.

“When she shows you different shades of pink lipstick and asks which one should I buy…” Twitter user @17_Lame wrote.

There are also relatable variations based around technology and people disgruntled with their love lives.

Me trying to find out genuine email from the spam folder.. pic.twitter.com/4Lt0Wbk9pg

She : you’re the first guy who has managed to enter my heart

Me *outside her heart* : pic.twitter.com/MaiKFGvfn8

It’s a photo of a bunch of flip-flops, yes, but its flat and silly nature have made it a viral canvas for content.