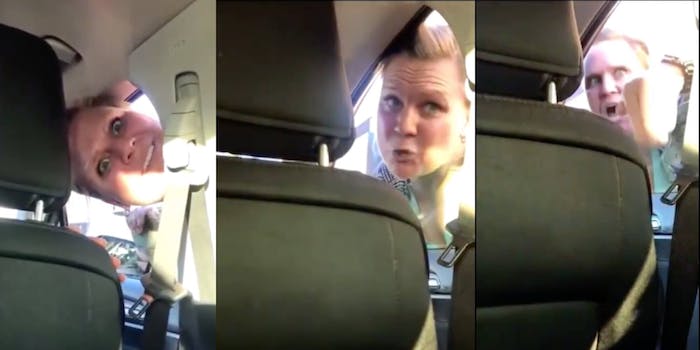 'They can't hear me because they're listening to Kidz Bop.'

In the same vein as dozens of other irate white women who’ve found themselves ranting on the wrong side of a camera, a new viral video is spreading online.

The internet awoke this morning to find that Kidz Bop, of all things, was trending on Twitter. A quick search revealed that the culprit behind the odd trend was a video of a mother ranting. Kidz Bop Karen, as much of the internet is now calling her, is skyrocketing to the top of everyone’s Twitter page.

The incident that elicited a thoroughly memeable response from Kidz Bop Karen appeared to begin with a minor traffic snafu. When the video begins, Karen has her head halfway through the open passenger window of a vehicle. Her own car, filled—according to Karen—with her children, is idling in the background. The woman filming is in the backseat of what appears to be an Uber or Lyft, whose driver expressly apologizes for whatever transpired before the video began. Then, it really starts to get good.

"Kidz Bop Karen" is the only thing I am going to talk about for the next week!! (here's the full video) pic.twitter.com/T2YrtUE696

“It is your fault,” Karen confirms after the driver apologizes and takes the blame for the incident. “And you know what, that didn’t upset me. But the bitch ass hoe that told me to calm down,” Karen continues with a condescending wag of her hand. “What I’d like you to do is apologize instead of being a bitch.”

“Sorry but you’re calling me a bitch, let’s set an example,” the woman in the back of the car, clearly exasperated, says. Immediately, the response appears to strike a nerve with the already infuriated Karen. “Oh sorry, I’m sorry,” she says. “My kids can’t hear me calling you a bitch.” The woman filming reminds her that her window is open, to which Karen responds, “They can’t hear me because they’re listening to Kidz Bop.”

And thus, a new internet legend was born. Kidz Bop Karen will live in infamy, among the likes of BBQ Becky and Permit Patty. In no time, the denizens of the web got ahold of the video and promptly meme’d it. “Kidz bop karen energy is what i’ll be taking into my 30s,” one user wrote.

"They can't hear me cus they're listening to kidz bop" fucking SENT ME https://t.co/OJ5VKKiyAt

kidz bop karen energy is what i’ll be taking into my 30s pic.twitter.com/UamHV8QHq8

If I have to see Kidz Bop Karen flop her hand on my timeline one more time, I'm gonna find her and draw some eyebrows on her and tell her to calm the fuck down.

Many of the resulting memes centered around the apparently unaware kids, blissfully listening to Kidz Bop while their mother went off on a stranger. “God I wish I was as unbothered as the lady’s kids listening to kidz bop,” one Twitter user wrote.

When your meant to be listening to Kidz Bop but you hear your mum going off on someone other than you.#AngryKaren #KidzBopKaren #kidzbop

Me jamming out to Kidz Bop while my mom calls the lady in the car next to us a bitch ass hoe pic.twitter.com/tbDsFC5at4

Me putting the kidz bop on because I know my moms about to call someone in the car next to us a bitch ass ho pic.twitter.com/iUz6VGuVKi

Another meme was born from Kidz Bop Karen’s rant, this time in the same vein as the AirPods meme from earlier this year. “I’m sorry, I can’t hear you because I’m listening to Kidz Bop,” one user wrote.

me listening to kidz bop but i can still hear my mom say the b word thru the window pic.twitter.com/08q0Iy3mBf

i cant hear you im listening to kidz bop