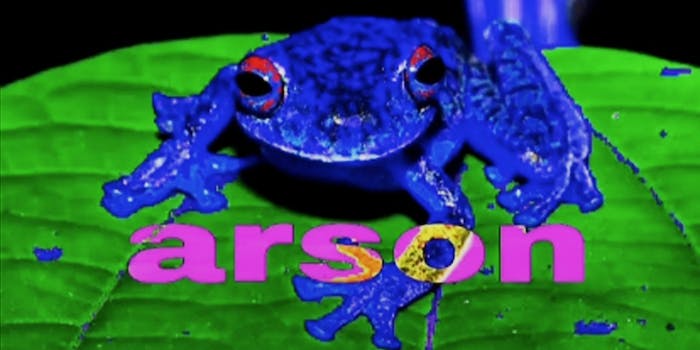 The distaste that Millennials and Generation Z have for Baby Boomers is palatable. After all, this is the generation that destroyed the economy, is actively destroying the planet, and largely seems to write off anyone who disagrees with them as “lazy” or “snowflakes.” And now that distaste has manifested itself into a wholly absurd meme—nay, movement—on TikTok. Everyone, meet Arson Frog.

The origin of Arson Frog

The whole thing started in late October when TikTok user @tinymeatgang69699 uploaded a clip featuring someone laughing uproariously at a selection of cheesy novelty decorative signs in a home goods store. “Thank goodness I don’t have to hunt for my own food,” guffawed the first sign. “I don’t even know where tacos live.”

The underlying joke, of course, is that this is exactly the type of humor that is enjoyed by boomers. As the video proceeded to go viral, many commented as such. One user, however, pointed out the inherent hypocrisy at making boomers the butt of the joke.

“I mean to be fair these are actually jokes,” wrote @matherfukr. “Half of Gen Z would laugh if someone took a picture of a frog, colored it blue and wrote arson under it.”

The comment soon received over 5,000 favorites, and it didn’t take long for this so-called Arson Frog to become a reality.

The spread on TikTok

A few days later, TikTok user @heyitssneha uploaded a video of her own. “So there’s this video, right? OK great, funny content, making fun of boomers,” she said in the clip.

“This comment was defending the boomers, saying how Gen Z’s humor is awful, how we would just laugh at like an awfully edited picture of a frog, right? So I did god’s work, and I made this image at 2:30 in the morning and I can’t stop laughing at it.”

“OK sorry about the laugh but can everybody please just make this their profile picture for no reason?” she continued. “Honestly, I just want to confuse a bunch of people.”

And what can we say, Neha’s fellow Gen Z’ers were only too happy to oblige. As KnowYourMeme points out, a number of comments on the video itself quickly adopted Arson Frog as their usernames and avatars.

The phenomenon even led to others being inspired to create their own Arson Frog fan art, as you can see in a couple of additional TikTok videos, below.

Though the meme has been (mostly) contained to TikTok, on Oct. 29 comedy producer Reed Kavner tweeted the TikTok video, which has since been viewed nearly 20,000 times.

“While we’re having fun with ‘OK boomer,’ here’s an adjacent phenomenon,” Kavner wrote, referencing that other boomer-dunking meme. “Hundreds (thousands? MILLIONS?) of TikTokers have changed their profile pic to a photo of a frog that says “arson” because of this video.”

While we’re having fun with "ok boomer" (shout out @TaylorLorenz) today, here's an adjacent phenomenon: Hundreds (thousands? MILLIONS?) of TikTokers have changed their profile pic to a photo of a frog that says "arson" because of this video pic.twitter.com/7IkAjlozaI

Eh, say what you will, but as far as we’re concerned Arson Frog is still funnier than the taco hunting sign, that’s for damn sure.