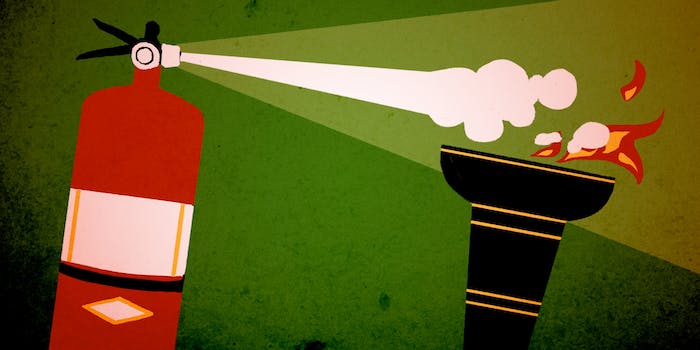 The 2016 summer Olympics, hosted by Brazil, are set to begin in just 20 days. And if you didn’t know it, let me tell you—they’re utterly fucked.

But don’t take my word for it: The governor of Rio de Janeiro, which is on the hook for the mind-boggling financial and social costs of mounting the games, last month declared a “state of public calamity” regarding their preparations, a crisis that could eventually bring about “a total collapse in public security, health, education, mobility and environmental management.” Public outcry, coupled with a dire security crackdown, has raised human rights concerns even as the country’s national guard threatens to desert over a lack of payment and, um, beds. There’s also “super bacteria” floating around the beaches and a number of venues.

What would be a good visual metaphor for this slow-motion catastrophe? Some dude trying to put out the Olympic torch with a fire extinguisher.

In fairness to the protester, who no doubt paid dearly for his stunt after being hauled off by security forces, snuffing the torch during its months-long relay before the games should probably be an Olympic event its own right—it has a proud and storied tradition. Why, just a couple weeks ago, one of his countrymen tried to douse it with water on a dare.

Back before the 2008 Olympics, several activists in China—including another with a fire extinguisher—sought to kill the flame as well.

Torch attacks date back to at least 1956, when the first southern hemisphere games were held in Melbourne, Australia. The torch had already gone out a number of times (and even broken) due to extreme weather and bad luck before it was due to arrive in Sydney. Which is when Barry Larkin, a veterinary science student, successfully handed off a fake torch to the city’s mayor as part of a prank he and his mates had cooked up to mock the solemnity of the relay. That torch was nothing more than “a wooden chair leg topped by a plum pudding can inside of which a pair of kerosene-soaked underwear was burning with a greasy flame.”