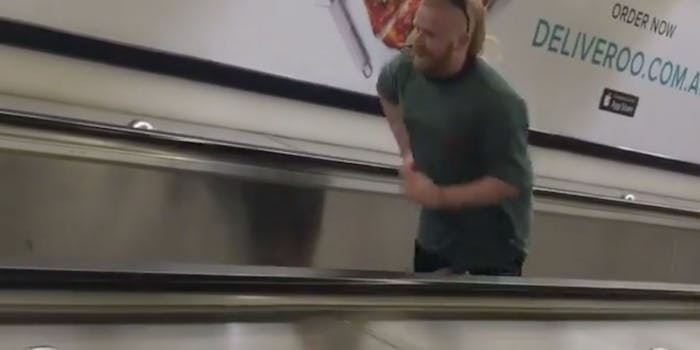 Brave Australian lives the dream of running up a down escalator

With everyone cheering him on.

Everyone has that moment. You’re in a mall, a sporting arena, or an airport—and you feel like living a little dangerously. All your life you’ve wanted to do it, but you just haven’t had the guts. You felt like you’d be judged, laughed at, or maybe even arrested for having the audacity to attempt such a stunt. Admit it: You fantasize about running up one of these.

Yes, a down escalator. We’ve all walked by one of these mobile staircases and, even when riding it in technically correct fashion, wanted to defy physics (and etiquette) and sprint upward for as long as we possibly could.

Well, leave it to some Australian dude to do just that.

Look at how the crowd cheers as he makes his way up the escalator with sheer will and tenacity. He probably just wanted to run up the moving steps really fast and didn’t think anyone would care or notice. But people did notice, and they decided to give him the support he deserved for breaking a rule that society unjustly imposes on its citizens.

Unfortunately, halfway through his climb, this rule-breaking Aussie lost his steam and decided that it didn’t make any sense to continue his arduous journey. But not everyone was impressed with him simply making an attempt—they wanted him to finish the job.

Hey, buddy, I don’t see you risking it all and dashing up an extremely long down escalator while the world watches. Give the man some credit for trying. He didn’t do this for himself—he did it for all the people out there who don’t have the balls to run up an escalator.

I always want to run up an escalator that's coming down but I'm always scared I'd get caught !