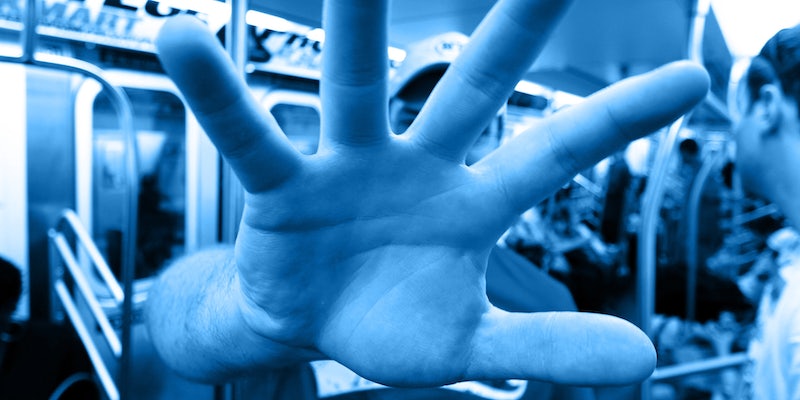 Getting blocked on Twitter isn’t the end of the world. There’s still time to change someone’s mind.

People block me occasionally on all social media platforms, either as a stunt or just because they hate me. The saying goes: Unfriend me once, shame on me; block me twice, lucky them. How should one deal with this?

Ignoring it isn’t an option, especially if a verified person has blocked you. Sure, you can still see the tweets of someone who blocked you, or create a new account to follow them, but it’s just not the same thing.

The first way to tackle this would be emailing the person who blocked you, since you cannot DM them, obviously. My colleague James Cook has tried this with the British equivalent of Donald Trump: @Lord_Sugar (3.38M followers). It worked, although Lord Sugar didn’t actually reply to his email. He just suddenly unblocked him. Unblocking without acknowledging the request is a bit insulting. Here’s his plea (click for full size): 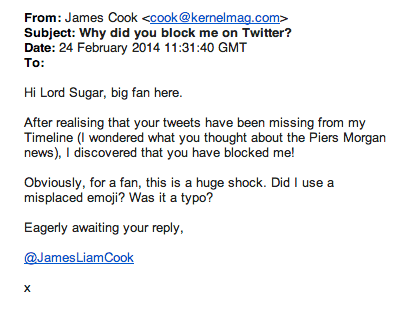 Define yourself by your blocked status. Change your bio to something along the lines of “Blocked by @simonblackwell.”

Simon Blackwell actually blocked me for some reason—maybe because I unfollowed him once. Every day I try to follow him back, just in case he might have unblocked me without saying so. At first, I tried following him relentlessly via the Twitter app for iPad, only to get a constant error message. When trying it via a laptop I got the damning verdict that he had absolutely blocked me. Stating what happened on my bio opens up the case to others. No block lasts forever; one day he will read it.

Find the person who blocked you—in real life. I accidentally tried that with British television presenter @Alex_Zane. At first, I didn’t even realise he had blocked me. We spoke to each other at The Soho Hotel London one night. I encouraged him to @-mention me on Twitter on the spot (otherwise, why are we even talking?).

But then, shockingly, he didn’t see my username appear in autocomplete. I tried tweeting something to him, and still he didn’t see my tweet in his notifications. Only then did we realise that he may have blocked me in the past. Awkward moment. He wanted to unblock me on the spot, but then hesitated, thinking he probably blocked me for a good reason, one that he can’t remember. We left it at that.

I wish my dad would unblock me on twitter

If you sleep with me, I’ll unblock you

i wish todd starnes didn’t block me. unblock me you marshmallow man racist coward. you got issues bro….

Pat it’s been three years you can unblock me now. pic.twitter.com/P8sx4uX5eT

In all the tweets above, the person who blocked these people isn’t @-mentioned, meaning they won’t see the tweet, anyway. Blocked people can’t break the blockade by Twitter communication alone.

Get the phone number of the frenemy who blocked you from their frenemy. The frenemy of your frenemy is your BFF. I recorded an answerphone plea to someone who blocked me:

Send a letter in the mail

Mail a letter to the person who blocked you using this formula:

You have blocked me on Twitter and I would like to read your tweets, just like I used to. Please unblock me this week, or ignore this letter.

Keep it short and sweet. By letting them know its OK to ignore the letter, you’re actually encouraging them to answer it with ease. Don’t pretend you’re not offended, but don’t admit it either. Remember: Play it coy.