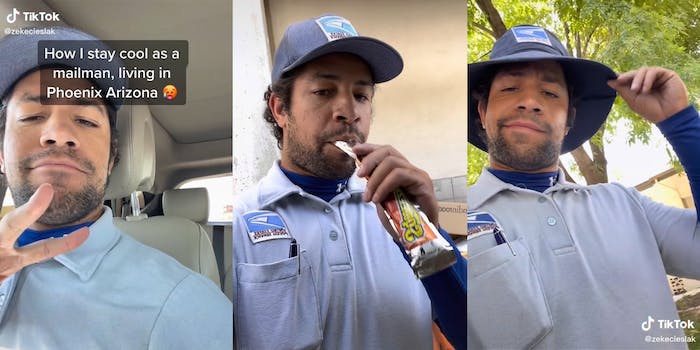 ‘That’s inhumane man’: Mailman shares how he stays cool while working with no AC, sparking debate

'It's fricking 2022 and government vehicles don't have AC.'

A mailman shares how he stays cool while working in Phoenix, Arizona in a viral TikTok. The clip sparked commentary from viewers on the lack of air conditioning in mail trucks.

Ezekiel Cieslak (@zekecieslak) posted the clip on Saturday with the caption: “It’s not easy work, but it’s honest work.” In a screenshot of the weather app, you can see the temperatures for the week being above 100 degrees Fahrenheit. The hottest day was slated to reach 114 degrees.

“Now obviously the key is to drink a lot of liquid so I usually drink 150 to 200 ounces a day,” he says in the clip, showing his ice cooler in the truck. “I fill up my cooler with ice and then I make sure to grab an electrolyte freezie pop.”

He continues, “Don’t forget the Powerade. Orange is the only flavor that matters.”

“I make sure to stop and drink every 15 to 30 minutes and I always take my breaks in the shade,” he says, showing himself standing in the shade in his uniform. “You also have to wear long sleeves and wear a brimmed hat.”

Then the clip shows a small fan inside his truck. “Yes, we have no AC but this fan actually does help and by the end of the day, I am soaked in sweat and covered in salt.”

According to the Seattle Times, the mail trucks we recognize hit the streets in 1987, and no, they don’t have air conditioning or airbags. They also have “unreliable” heating systems, meaning mail people can overheat in the summer and freeze in the winter. In fact, some trucks have caught on fire after being used past their lifespan of 24 years. The Postal Service is slated to overhaul its current fleet of vehicles in 2023.

Many people were unhappy to hear the mail trucks have no air conditioning.

“I literally [do] not mind paying taxes so u guys can have AC in the car!!! That sounds illegal honestly,” a third added.

Other people chimed in with how they help their mail people. “In my old house I used to have cold water and Gatorade for my mailman/girl. They always appreciate it,” one user wrote.

The Daily Dot has reached out to Cieslak via Instagram direct message.