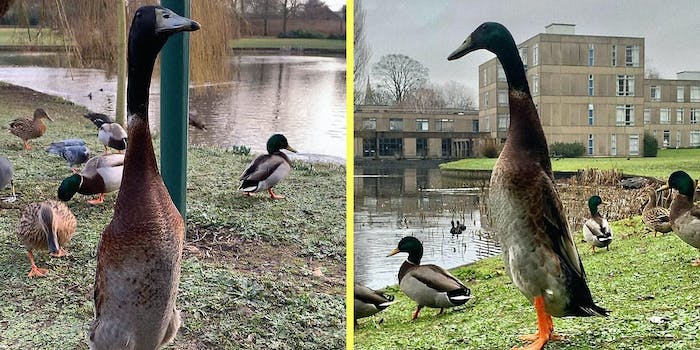 There are few things that capture the collective attention of the internet more than broken, ill-tempered, or abnormally shaped or sized animals. It’s this phenomenon we have to thank for the latest animal to go viral—an extremely tall duck appropriately and affectionately named “Long Boi.”

The duck’s sudden popularity can be attributed to the Twitter account remembering children’s book author Dick King-Smith—who penned over 130 books during his career, including The Sheep-Pig, which the film Babe is based on. The account, which is managed by King-Smith’s family, tweeted about Long Boi this week.

At over three-and-a-half feet tall, Long Boi is evidently the “tallest mallard duck to have ever lived” since records began. He currently resides at the campus of the University of York in England. (He also earned a post in the InterestingAsFuck subreddit, where one amused commenter quipped, “That’s three ducklings in a trench coat.”)

The tweet instantly went viral, earning over 50,000 likes within hours. “Long Boi” soon began trending on Twitter as people gaped in awe at the splendor of the stately mallard—while others shared jokes and memes.

One user pointed out the similarity between Long Boi and the Georges Seurat masterpiece “A Sunday on La Grande Jatte.”

And naturally there was at least one “milkshake duck” joke:

And the Slim Jim account naturally also had some thoughts about Long Boi!

Although those of us on this side of the pond (pun fully intended) are just learning about Long Boi, the mallard is a celeb in his own right over in the UK. He even has his own Instagram account boasting 10,000 followers where you can follow the life and times of Long Boi!

Long Boi is a true king in every right.