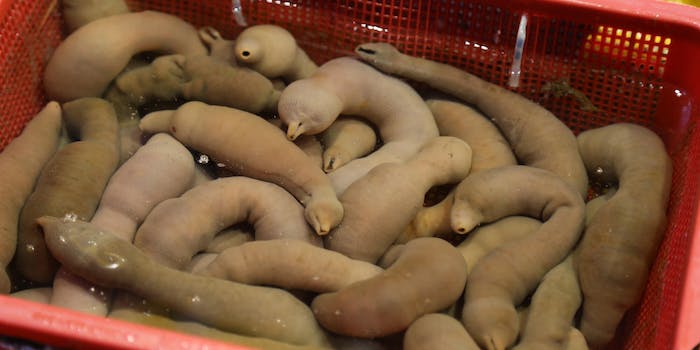 The internet is freaking out over a bunch of “penis fish.” Yep, you read that right. But these marine animals aren’t actually fish at all. They’re worms.

The Urechis Caupo bury deep in the sand along the California coast, one of the only places it can be found in the continental U.S., according to a column from BayNature.org. Recent storms have disturbed their burrows, leaving thousands of these worms, often called “penis fish,” on Drake’s Beach in Point Reyes, California.

Online, they’ve received quite a bit of attention due to their uncommon appearance and nickname. The BBC reports that another variety of the worm is commonly consumed as a delicacy in East Asian markets. But to many, their phallic appearance opens a whole can of joke-worthy worms.

One Twitter user said these worms made her feel “intrigued but uncomfortable.” Another said they haven’t seen “this many penises on a beach since the Cronulla riots.”

Others lamented having to see the 10-inch worm at all.

“Could’ve gone the whole day without seeing the penis fish but no,” one user wrote.

Amid all of the jokes and banter, one Twitter user thought the penis fish proved a valid point about sending inappropriate images online. Wrote @ROLLANinthedeep: “All the news and pics of the ‘penis fish’ in California only proves that dick pics are not cute y’all.”