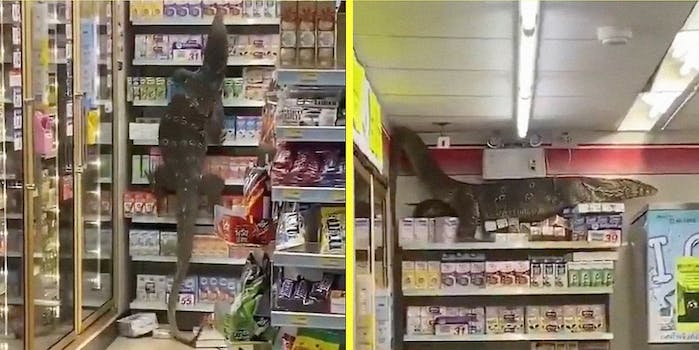 The six-foot lizard eventually ran back into the wild.

On Wednesday, the Twitter account danajiru posted a video showing a monitor lizard climbing up a shelf in a store, trashing products in its wake, and resting at the top. It doesn’t show what happened just before or after, but it didn’t matter. The lizard was viral.

The video now has more than 7 million views, and it’s reportedly from a 7-11 in Bangkok, Thailand, though commenters were certain it was Australia or Florida. The video posted to Twitter has music over it, but in the original clip posted to Facebook, you can hear people’s panicked reactions and see more of the lizard’s ascent.

The monitor lizard jokes came out, too.

The brands caught wind of the video and attempted to jump in, but people weren’t having it.

And, of course, Godzilla vs. Kong.

The lizard reportedly stayed up there for an hour, before a rescue team arrived. However, it was not captured. It instead ran back into the wild.