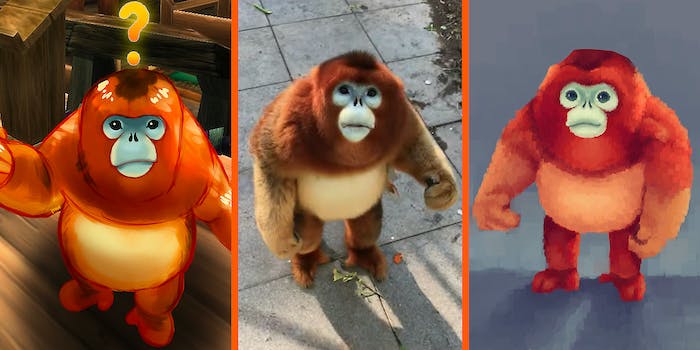 ‘Who do I have to talk to to get one of these?’

A YouTube channel uploaded a video featuring a monkey standing upright and eating berries out of a person’s hand on April 9. The apparent caretaker, who is seemingly the one filming the interaction, walks backward as the monkey totters after them, taking berries one by one and popping them in his mouth.

While the video, posted by the Golden Monkey YouTube channel, is extremely cute, its star looks almost like a CGI version of what a person would draw if they were drawing a monkey by memory only.

So when the video was shared by the Twitter account Cozy Club, it went viral and many questions were posed online: What kind of monkey is that? Where does it live? How do I get one? Are we sure that it’s not just “a little man in a costume?”

Well, unlike many questions sparked by viral internet content, these are easily answered. Despite its resemblance to Ewoks, as many pointed out, the star of the video is a golden snub-nosed monkey, an endangered species native to China.

Naturally, when something that is both cute and funny is shared online, memes follow.

The monkey even popped up on TikTok, where it similarly went viral and is receiving even more love. “New monkey just dropped,” @yothisshitcrazy posted with the video.

People online have even been sharing fanart of the monkey. “I was rlly depressed but I drew monke frend so now I’m slightly feeling better,” one Twitter user wrote, attaching their artwork of the viral sensation.