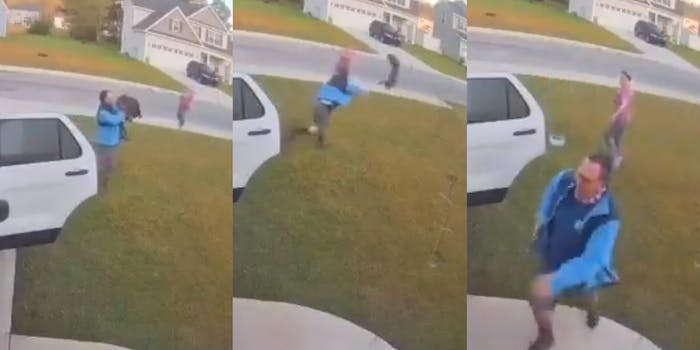 That's one way to start your morning.

A viral video shows a man hurling a bobcat across his front yard after it sprints across the street and attacks his wife.

Twitter user @Evi3Zamora uploaded the video yesterday with the caption, “This was a wild 46 seconds.” The clip exploded in popularity and has already racked up more than 7 million views at the time of this writing. It’s also earned a staggering 103,000 upvotes on the r/PublicFreakout subreddit.

The video begins with an unidentified man walking toward his car and bidding a “good morning” to a jogger who passes his house. As he puts his mug on the hood of his car and fishes his keys out of his pocket, a bobcat dashes across the street toward the car.

A woman holding what appears to be a pet carrier walks toward the passenger’s side of the car. The bobcat yowls from behind the woman, who screams and runs around the back of the car.

The man picks up the bobcat and shouts, “Oh my God, a bobcat!” He tosses the animal across his front yard and yells, “It bit me!”

As the bobcat scurries under the man’s car, he shouts, “I’ll shoot that fucker!”

In a follow-up tweet below the viral video, @Evi3Zamora wrote, “Lmao ok i just learned that this mans name is ‘Happy’ and he quote ‘shot that fucker’ it was rabid.”

Social media users said the video was originally uploaded to TikTok by user @keithmcgeaux, but the app repeatedly removed the post and ultimately banned the account for violating its anti-violence policy.

CBS Austin anchor John-Carlos Estrada tweeted that both “Happy” and his wife have received treatment and rabies vaccines.

Some social media users have said the bobcat fiasco took place in Pender County, North Carolina. The Pender County Sheriff’s Office did not immediately respond to the Daily Dot’s request for comment, but three days ago, the department wrote on Facebook that a positive case of rabies was discovered in the area and that on April 9, a bobcat was killed near the Creekside Subdivision in Burgaw.

Twitter users have heralded “Happy” as a hero for his feats of strength, bravery, and quick thinking. They also just found the bobcat video generally hilarious.

As the Blaze’s social media editor Jessica O’Donnell put it, “sometimes you gotta yeet a bobcat.”