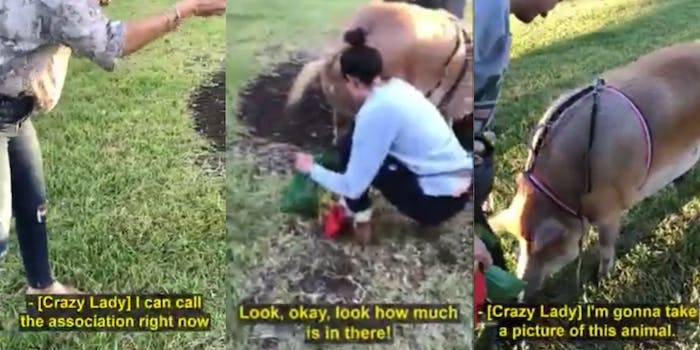 The woman really loses it once the pig defecates.

A video of a so-called “Karen” harassing a woman and her emotional support pig is making rounds on Reddit.

In the video, the woman is seen following the pig’s owner as she walks her leashed animal in a park. The owner’s friend filmed the encounter and can be heard in the background of the video. The woman, who is referred to as a Karen in the video, approaches the two friends to question them about the pig, and the owner’s friend asks her to leave them alone.

“This is a community that has bylaws, and if you have a dog, you put it on a leash,” the woman says to them.

The pig is on a leash in the video, and his owner asserts he is under control. The woman responds by saying, “It’s huge!” to which the owner’s friend says, “So what?”

The pig then defecates, and the woman raises her voice and says, “Look at that!” The friend responds that pigs poop, just as a pet dog would do. The woman complains about the amount of feces, while the owner scoops the waste into a doggy bag.

The owner tells the woman that the pig is her emotional support animal and to contact her lawyer if she has an issue. The woman, incredulous, says she’s going to call the community’s homeowner’s association and continues to follow the friends and the pig around for a couple more minutes.

“We’ve been living here for a year,” the owner says.

“You’ve been living here for a year, then how have I not seen you?” the woman asks.

She proceeds to make a call to report the pig to the HOA, and the friend says that they already know about the animal.

“He’s taking his business on the grass,” the woman complains in the phone call.

“So does everybody’s animals,” the friend responds.

It’s unclear where or when the video was filmed. The clip, uploaded to r/PublicFreakout on Saturday, has over 58,000 upvotes and 5,000 comments. A lot of redditors poked fun at the woman’s comment questioning why she had never seen the pig owner before.

“This pig been here a year, huge as hell and you missed it,”one redditor said. “Karen isn’t as tuned in as she would have us believe.”

“It’s HOA Karen’s.. they think the neighborhood belongs to them,” another user said.

Emotional support pigs, while uncommon, exist. However, since pigs are considered livestock, each municipality’s zoning laws may have different rules about pet pig ownership.