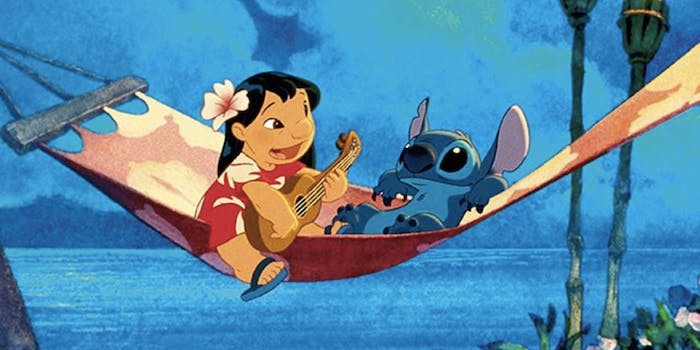 Everyone is defending ‘Lilo & Stitch’ after animator’s Tumblr critique

'A kids movie commenting on broken homes, finding family in friends.. you missed it dude.. by a mile.'

A Tumblr post criticizing Lilo & Stitch has unexpectedly set the internet on fire, as fans rush in to defend what many consider to be their favorite Disney movie.

Animator Hailey Lain shared her in-depth criticisms of the film to Tumblr last week after a comment prompted a question as to why she thinks it’s a bad movie.

The gist of her critique seems to be that the narrative portrays Lilo as a brat, and rather than have both her and space monster Stitch learn that bad behavior has consequences, the film instead focuses on the idea that “family means nobody gets left behind or forgotten.”

“The message of the movie … even says that it IS the family’s job to fix its members’ messes … without holding that family member responsible or accountable,” Lain wrote, before jumping into an explanation of what she believes would have been a better way to craft the story.

Lilo & Stitch is one of those movies that is fiercely defended by those who love it, and many didn’t take kindly to Lain’s painting Lilo as a bratty kid who needed to be taught a lesson.

“Lilo is a bullied 6 year old trying to process her parents’ death,” @ruby_dubydu pointed out.

“She had the audacity to lash out at a bully who insulted her by invoking her RECENTLY DEAD MOTHER,” snarked @ThatAuntZelda.

And a common concern was that Lain’s take overlooks the fact that Lilo is a type of character rarely portrayed on screen for young kids of color to identify with.

“Black & Brown kids do not get to be kids,” writer Vita Ayala said in response to the post. “They’re held to adult standards and demonized from the jump. Not allowed trauma, mental illness, or [to] ever be sad/angry.”

But pretty much nobody was here for this kind of attempted take down of Lilo & Stitch.

Even if Lilo & Stitch started trending on Twitter for less-than-ideal reasons, the best part is that now we’re all thinking about Lilo & Stitch and can just go watch it all over again.