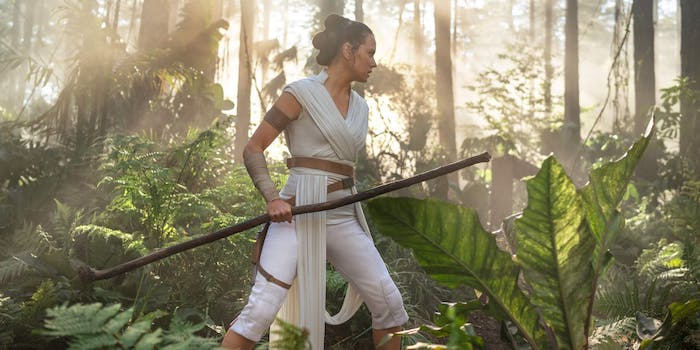 Despite the best intentions of the cast and crew, The Rise of Skywalker proved to be every bit as divisive as its predecessor, but it also became the first widely panned Star Wars film in the Disney era. Several months after the film’s release, one of its stars is addressing some of the film’s backlash.

Daisy Ridley joined host Nina West on a new episode of DragCast, and during their conversation, they touched on a variety of topics including The Great British Bake Off, RuPaul’s Drag Race, and theater. But the conversation also steered briefly toward Star Wars, the franchise that made Ridley a star while also being a big centerpiece of cinematic history.

When West asked Ridley about stepping into a franchise that has so much legacy behind it (around the 10-minute mark), Ridley noted that for the most part, it’s been a positive experience. But other times, such as when the reception to The Rise of Skywalker started coming out, not so much.

“It’s changed film by film, honestly,” Ridley replied. “Like 98%, it’s so amazing. This last film, it was really tricky. January was not that nice. It was weird, I felt like all of this love that we’d sort of been shown the first time around, I was like ‘Where’s the love gone?’ I watched the documentary, the making-of, this week, and it’s so filled with love, and I think it’s that tricky thing of when you’re part of something that is so filled with love and then people. You know, everyone’s entitled to not like something, but it just, it feels like it’s changed slightly, but I think in general that’s because social media and what have you.”

Ridley acknowledges that it’s been rough to witness, but otherwise, she is taking something of a diplomatic approach to the backlash. Her comments this time around sound very similar to what she’s said when addressing the backlash to The Last Jedi, which was also a divisive film online.

West then asked Ridley if she thinks that our usage of social media had something to do with how prevalent the conversation around this film (and Star Wars in general) has become. And even though Ridley isn’t on social media, Star Wars is so pervasive that for a time, she couldn’t even escape Star Wars headlines.

“I think in general, people share so much on social media that if I went—I don’t have social media, anyway—but if I went to a film and didn’t like it, I just wouldn’t tweet about it,” Ridley added. “But it’s such a conversation and it always has been. I guess now conversations are just more public, so there’s stuff I wouldn’t have seen, but honestly trying to scroll through my newsfeed in January and trying not to see Star Wars stuff, I’d see headlines and be like ‘Oh my god this is so upsetting.’ So it’s been tricky, but then it’s having that thing of I feel really proud of it, and I’m so thrilled to be part of it. Yeah, but it’s a funny thing.”

Ridley is torn between the reaction to it and her own feelings about the film, and from the way she describes it, she has a lot of fond memories making it. But she’s far from the only actor in Star Wars to voice her opinion on the last installment of the sequel trilogy.

John Boyega, who wasn’t as fond of The Last Jedi and was more pleased with what he got to do in The Rise of Skywalker, has taken to openly trolling Star Wars fans on social media like those who were upset about a certain ship or the frequency in which Finn says Rey’s name in the film. Oscar Isaac hasn’t been shy about vocalizing his disappointment in the lack of a Finn and Poe romance in the trilogy and plainly putting the blame on Disney. Kelly Marie Tran’s been rather diplomatic in her response to Rose Tico being almost completely cut out of the film, but in some of her post-Rise of Skywalker interviews, she’s acknowledged that she filmed scenes that didn’t make the final cut. Even Domhnall Gleeson, while promoting his new series Run, wished that we got to see a bit more of General Hux as a Resistance spy before his sudden death in The Rise of Skywalker.

What it highlights is that it’s all really a complicated and subjective thing. Actors might have loved making films that you hate and hated making films that you love; it’s complex and valid and messy. As we’ve seen amid press surrounding the home release of The Rise of Skywalker and the publication of the novelization, people have a lot of feelings about The Rise of Skywalker. And now that we’re all home with plenty of potential downtime to watch more Star Wars movies and social media as a main way to voice it, we can watch them again and again from a certain point of view.

You can listen to DragCast’s full episode with Ridley here.