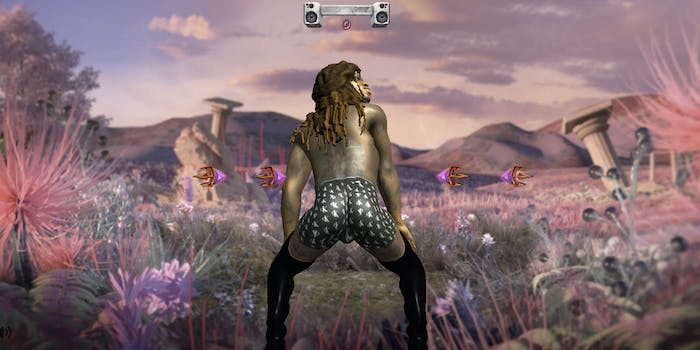 Twerk Hero is available for free on mobile.

Lil Nas X fans who couldn’t get enough of the chart-topping “Montero (Call Me By Your Name)” are in luck, as the rapper has released a new mobile game loosely based on the song’s music video called Twerk Hero.

Lil Nas X announced Twerk Hero on Twitter yesterday, sharing a link to the game and a brief video that shows his in-game avatar twerking all over the screen. It comes with a fake “Adults Only” rating, because of course it does.

The gameplay is straightforward. Players simply grab hold of Lil Nas X’s booty and shake it to hit the three-pronged projectiles—or “temptations”—that rush him from all four quadrants of the screen. If you hit enough of them to earn two out of three stars, you’ll have the option to advance to the next level.

The background of each level contains scenery from the “Montero” video, an unapologetically queer visual smorgasbord in which Lil Nas X rides a stripper pole down to hell and gives Satan a lap dance.

Despite its simple objective, Twerk Hero is more difficult than one might expect from a free mobile mini-game. The number of temptations increases in each level, bombarding Lil Nas X’s booty with alarming speed. In the fourth and final level, Lil Nas X goes from twerking while standing to kneeling in a submissive position with Satan behind him. I can’t confirm whether this actually limits your twerking mobility within the game, but by the final level, I was frantically throwing ass across the screen in an effort to eliminate all the temptations.

Gamers who want to put their twerking skills to the test can check out Twerk Hero here. (Do you think Kaitlin Bennett has tried it yet?) It appears to only work on mobile, not desktop, so plan to throw it back accordingly.