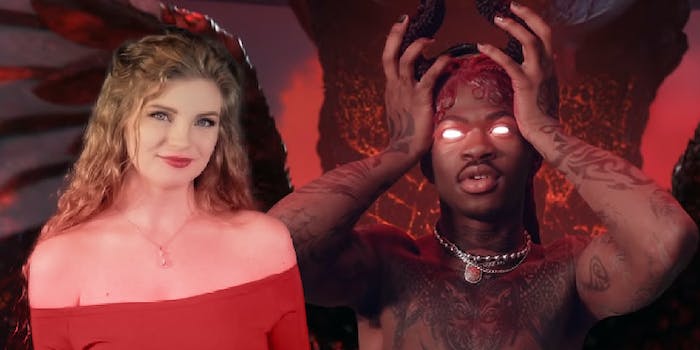 The Kent State Gun Girl did not fare well against the rapper and mega-troll.

After pearl-clutching conservatives spent all weekend disavowing Lil Nas X’s Satanic and gay as hell “MONTERO (Call Me By Your Name)” video, a formidable opponent entered the ring last night: Kaitlin Bennett, better known as “Kent State Gun Girl.” And much like the stodgy ring-wingers who proceeded her, Gun Girl got owned by the Twitter-savvy rapper.

The Lil Nas X-Gun Girl feud started auspiciously enough last night, when Bennett tweeted a screenshot revealing that Lil Nas X had blocked her. “It’s week like these that I’m thankful to be blocked by Lil Nas X,” she wrote.

Never one to miss a good trolling opportunity, Lil Nas X let Bennett know she was still on his radar. “I still see ur tweets shitty pants,” he wrote in a quote tweet, referencing a rumor reported by Barstool Sports in early 2019 that Bennett once pooped her pants at a frat party. The rumor has dogged the gun-toting conservative on social media and at public appearances over the last two years.

Bennett, not content to take her “L” with grace, fired back at Lil Nas X with a pair of quote tweets.

“The guy that takes it up the ass from Satan wants to talk about ‘shitty pants’?” she wrote first. Then, having apparently not gotten the reaction she wanted from her casual homophobia, Bennett took casual racism for a spin and asked the star, “Do you still see your dad?”

Then, Lil Nas X went for the jugular, quoting Bennett’s dad tweet and writing, “yep and i might fuck yours.”

It was a knockout punch from the “Old Town Road” rapper, earning 335,000 likes and thousands of responses applauding the savagery. (Bennett’s racist tweet, by comparison, has roughly 3,600 likes.)

You’d think after getting ethered on Twitter for all the world to see, she would simply log off for the night. But that’s not how right-wing personalities bring in the dough. So Bennett dusted herself off, stretched, and proceeded to do some breathtaking mental gymnastics with her next tweet.

“Lil Nas just threatened to rape my dad,” she wrote above a screenshot of the rapper’s last tweet. “Sounds about what I’d expect.”

“Maybe you shouldn’t have brought up his dad in such a condescending manner if you couldn’t handle him talking about yours in the same,” @adoptmoredogs tweeted at her. “Seems like you started and now want to play victim.”

Bennett stayed busy retweeting right-wing pundits and blogs last night, while Lil Nas X seemed unfazed by the beef. He also dunked on Gov. Kristi Noem (R-SD) and cornball rapper Joyner Lucas for good measure, then issued a challenge to anybody else who couldn’t stand the sight of him getting topped by the devil: “Who’s next.”

Meanwhile, “Satanic Panic” is trending on Twitter like it’s the ’80s all over again. What a time.