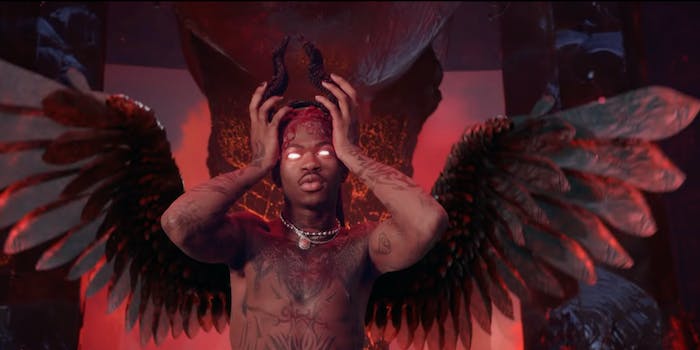 It's filled with Biblical and ancient Greek imagery.

Overnight, Lil Nas X dropped his latest music video for “Montero (Call Me By Your Name),” a colorful and unapologetically queer fantasy full of Biblical and ancient Greek imagery. Along with being an incredibly catchy song, it’s also becoming a meme goldmine.

If you haven’t watched it yet, take a few minutes to do just that. During the video, Lil Nas X encounters a snake at the Garden of Eden, put on trial in a Greek amphitheater as the judges and guards wear French court-inspired wigs, slides down a pole all the way to Hell, and seduces Satan himself before snapping his neck and putting on Satan’s horns.

Lil Nas X and the crew who put together the video for “Montero” did not skimp on any of the details. Each set-piece and each costume has intention and is part of telling a larger story. (He even references Plato’s Symposium 191A!)

It’s a definite departure (and a delightful one) from “Old Town Road.”

And while there is plenty in the “Montero” music video to analyze, Lil Nas X’s lap dance with Satan himself is getting meme’d.

Some people even imagined how Satan might try to refute the music video afterward.

Lil Nas X countered some of the backlash by pointing out the hypocrisy of people getting mad when he does go to Hell and some of the other things worth getting mad at more than a man pole-dancing in a music video.

Several hours earlier, Lil Nas X posted a heartfelt and emotional letter he wrote to his 14-year-old self about coming out. (“Montero” is named after Lil Nas X himself, whose real name is Montero Lamar Hill.)