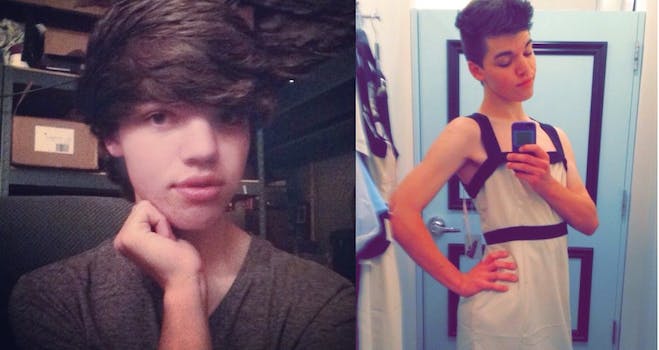 A new statement from the transgender girl's mother shows she still doesn't accept her identity.

The mother of 17-year-old Leelah Alcorn continued to misgender the transgender teen in brief statement she made to a news outlet on Thursday.

Leelah’s bitter indictment of her parents’ attempts to keep her from expressing herself went viral flowing her death earlier this week. It noted that they had taken her to Christian-based conversion therapy, refused her request to begin the medical process of transitioning, pulled her out of public school, and confiscated her access to her online community of support for months at a time.

Thursday, CNN released a short statement from Leelah’s mother, Carla Alcorn, along with a interview with one of of Leelah’s friends.

In her brief conversation with CNN, Alcorn stated that no service had been held for their daughter because they feared protests. Supporters of transgender rights around the world have heavily criticized Leelah’s parents for their behavior, which included releasing an obituary of Leelah after her death that continued to refer to her using male pronouns, and which described her as a “loving son.”

Alcorn insisted that she loved her “son” unconditionally, even while continuing to reject her daughter’s gender identity on religious grounds:

“We don’t support that, religiously,” she told CNN.

“But we told him that we loved him unconditionally. We loved him no matter what. I loved my son. People need to know that I loved him. He was a good kid, a good boy.”

She also stated that Leelah only brought up the subject of her transgender identity “once,” and then “he just quit talking about it.”

My mom started taking me to a therapist, but would only take me to christian therapists, (who were all very biased) so I never actually got the therapy I needed to cure me of my depression. I only got more christians telling me that I was selfish and wrong and that I should look to God for help.

Though Leelah’s parents may not have accepted their daughter’s gender identity, support for transgender and other non-binary expressions of gender has been growing, both culturally and within the medical profession. In 2013, the American Psychiatry Association phased out the phrase “gender identity disorder” from its update to the Diagnostic and Statistical Manual of Mental Disorders after years of recommendations from mental health officials. In doing so, the Association stated, “It is important
to note that gender nonconformity is not in itself a mental disorder.”

But if the medical profession does not consider non-conformity to gender norms to be a sign of problems or illness, many religious organizations still do. In October, the Southern Baptist Convention, the largest protestant religious denomination in the U.S., held a three-day event titled “The Gospel, Homosexuality, and the Future of Marriage.” Although the event was an attempt to urge greater tolerance within the church community around the topics of queer and genderqueer identity, it received ongoing backlash online because it invited no gay or genderqueer Christians to the conference.

In the CNN interview, Alcorn stated that she had never heard her daughter’s chosen name until she read it on Tumblr. In her farewell post, the teen had crossed out her given name and signed her note as “Leelah.”

Though Alcorn told CNN she worried she and her husband were being mischaracterized as “horrible people,” a secondary CNN interview with neighboring student and friend Chris Davis showed a teenager who expressed support for his friend—while still continuing to misgender her.

Though Davis also continued to use the wrong pronoun to refer to Leelah after her death, he said that there was more support for Leelah at school than at her home.

“I hate the fact that [she] had to live in a home that didn’t support [her],” he stated.

The universal outpouring of support for Leelah in the wake of her death has drawn greater attention to the needs of transgender teens, including calls for broader education about gender issues, as well as a Change.org petition calling for the passage of a nationwide ban against conversion therapy to be known as “Leelah’s Law.”

If you are in crisis or struggling with transgender identity issues, visit translifeonline.org.

Update Jan. 3, 11:02am: A Tumblr representative wrote in an email to the Daily Dot: “We have honored the family’s request and made the blog inaccessible to the public.”