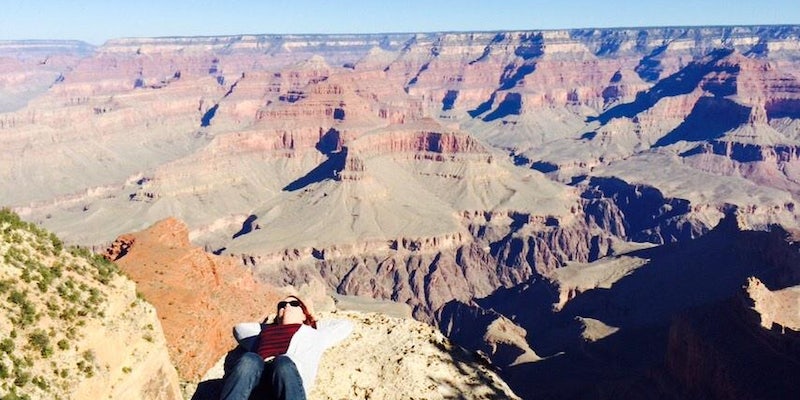 Statistics spell out just how difficult it is to be a transgender teen, but on Twitter, the trend #RealLiveTransAdult aims to show that survival and happiness for trans teens is possible.

This picture only exists because I transitioned. Road tripped across the U.S. as a #RealLiveTransAdult pic.twitter.com/lL0eTveTHK

On Sunday, shortly before her death, transgender teen Leelah Alcorn left a long and heartwrenching note on her Tumblr explaining that a combination of parental rejection, isolation, and inability to receive proper medical care had left her hopeless. Referencing Dan Savage‘s controversial “It Gets Better” campaign, she wrote, “People say ‘it gets better’ but that isn’t true in my case.”

As news of the 17-year-old’s suicide made international headlines, many supporters of transgender rights pointed to the parts of Alcorn’s note that showed a teen in desperate need of a supportive community of adults and others like her. Alcorn, under the false impression that she was already too old to successfully transition.

On Tumblr, user mschatelaine wrote, “Leelah died because she was isolated, deliberately by her parents and community and culturally by the images that she was given, that did not show her a way in which she could live. We need to do better.”

As a response to Alcorn’s death, comedian and activist Red Durkin reacted by coining this hashtag:

If you're a trans teen and you can't imagine your life going forward, I'm 31 years old and I work in a bookstore. I'm a #RealLiveTransAdult

Twitter’s transgender community immediately began using the hashtag to describe their own lives and paths to survival.

I'm 66, out for years, happy with my life. I lost no one & nothing when I transitioned. Not all our stories are tragic. #RealLiveTransAdult

It's tough as a trans teen, but you can move forward: 54, run a nonprofit, a trans advocate. #RealLiveTransAdult pic.twitter.com/dieJBdaYcU

I'm a #RealLiveTransAdult & I'm on duty tonight w/ my crew @ the firehouse. I once thought this impossible but life is full of surprises.

I never thought I'd be accepted, but I'm a proud #RealLiveTransAdult, connecting thousands of gamers together every year at @TooManyGames .

I'm a #RealLiveTransAdult who is frankly pretty boring. I watch a lot of Netflix. Mostly epic binges of "The Office." And that's OK! :)

Many adults spoke of having to move long distances to find their communities, and of the importance of having other trans friends around them for support and acceptance.

Growing up a trans youth in isolation was hard. When I got a chance to connect with #RealLiveTransAdult s I found love, strength, power.

Responding to Alcorn’s fear that she was too old to transition, many adults using the tag pointed out that they were much older when they made successful transitions:

Aware of being nonbinary since age 4. Didn't know of other nonbinary ppl til age 21. Started hormones at 28. Am 31 now. #RealLiveTransAdult

I'm a #RealLiveTransAdult who didn't know for sure she was trans until her 30s, and didn't start HRT til age 37. Never too late to be YOU.

_I know a hell of a lot of trans people._ And not one of them transitioned before 20. #RealLiveTransAdult

Graduated college and moved to brooklyn, became a published author, and as of Friday am 2 years on testosterone. #RealLiveTransAdult

#RealLiveTransAdult I’m a materials scientist/engineer/marketing-executive and I travel the world; I transitioned at 43 and love my life.

The hashtag also served as an inspiration to many teens and young adults who were still struggling with their situations and their lives.

@feministprince that sounds really intense. I just moved away from a toxic town. here if you want to talk #RealLiveTransAdult

reading the #RealLiveTransAdult tag and crying. I'm 21 and still working on it. All the uplifting tweets are helping so so much.

I'm a 30 year old nuclear physicist planning for the future. I didn't always think I'd make it past 25 but here I am, a #RealLiveTransAdult

I won't stop speaking out until I see my daughter become a #RealLiveTransAdult. These stories are so inspiring! Bless you all.

On Tumblr, a short post collecting some of the early tweets garnered nearly 90,000 notes. Meanwhile, mourning continued for Alcorn, with supporters posting fanart of the girl who wrote on her Tumblr that she only rarely got a chance to express her true gender:

i just made an ilustration in honor of leelah alcorn, i know its not perfect but i try to do my best.. #LeelahAlcorn pic.twitter.com/LNHjbCXr3P

The visibility of the hashtag also underlines the need for education about transgender issues and awareness. As Alcorn herself wrote, “Gender needs to be taught about in schools, the earlier the better.” On Change.org, a petition to have Alcorn’s chosen name put on her headstone instead of the male name assigned to her gained over 30,000 signatories. Another, proposing to create “Leelah’s Law” to ban the kind of anti-transgender conversion therapy to which Alcorn’s parents subjected her gained over 80,000 signatures at press time.

By allowing trans teens to see and hear from former trans teens who’ve made happy lives for themselves into adulthood, the hashtag has proven eye-opening for everyone—and hopefully a boon to those who need it most.

I am a #RealLiveTransAdult and I want you to know that we love, love, love you and we need you.