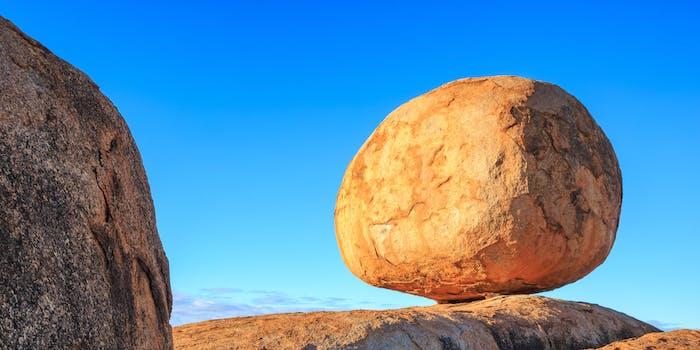 What exactly is a ‘large boulder the size of a small boulder’?

A large boulder fell onto the highway in Colorado’s San Miguel County, according to the official Twitter account of San Miguel Sheriff’s office. The boulder was quite big and was completely blocking the eastbound lane of traffic. Just how big was this boulder you ask?

Apparently it was the size of a small boulder.

Large boulder the size of a small boulder is completely blocking east-bound lane Highway 145 mm78 at Silverpick Rd. Please use caution and watch for emergency vehicles in the area. pic.twitter.com/EVMmDf0IJu

The somewhat confusing description thrilled and delighted Twitter, and people had a field day mocking it. It’s now a full-blown meme.

On an otherwise bleak day, this tweet is bringing me real joy. New phrase for every obstacle in my life: a large boulder the size of a small boulder. https://t.co/HSFychtMaD

Schrodinger's Boulder. Large and Small at the same time.

Perplexing descriptions aside, the sheriff’s department got the boulder removed using a snowplow in approximately 30 minutes. It seems they’re pretty good at their jobs—and also at Twitter.

And if you’re still wondering about the exact size of the chunk of rock in question, the sheriff’s department followed up with slightly more precise measurements: 64 cubic feet and 10,000 pounds.

The boulder that fell onto Highway 145 at Silverpick Rd outside Telluride was approximately 4ftx4ftx4ft (64 cubic ft) and weighed about 10,000lbs. No injuries or vehicle damage. Eastbound lane blocked for about 30 mins until a snow plow was able to move the boulder off highway. pic.twitter.com/mpCF3JdsC8

Which, from here on out, will be the official dimensions of a medium-sized boulder.

Update Jan. 30, 2pm CT: Susan Lilly, a public information officer for San Miguel County, has come forward as the author of the now-famous boulder tweet. “I own my mistake, and now I rock it,” she wrote.

She says that she meant to write, “a large boulder the size of a small car.” That makes way more sense, but her mistake gained her a lot of fans.

I am the author behind this now viral tweet. I own my mistake, and now I rock it. #largeboulder https://t.co/hvHb8JX0ij