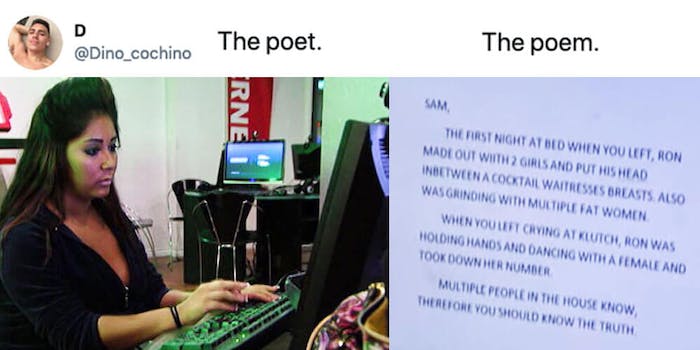 ‘The poet, the poem’ meme takes iconic lines and turns them into art

What is art, exactly?

Is it a multi-million dollar abstract expressionist oil painting sitting in a stuffy gallery? A banana duct-taped to a wall? Or is it even a morning show that inexplicably cuts to an image of a cat eating spaghetti during a segment on drinking and driving? An expression of human creativity—art is perhaps best left to the eye of the beholder. Hence, “the poet the poem” meme currently making its way around Twitter.

The setup is fairly simple, even as memes go. A user takes a quote—in either a sincere or (more often) ironic manner—and places it alongside the fictional or real character or artist who said the quote.

In just a few examples of the “the poet, the poem” meme you can see below, this could include Phoebe Waller-Bridge’s character in Fleabag announcing that she wants to “fuck a priest,” Lorde dropping the mic on Diplo, or the colorful delivery of Eric from Sex Education telling another character to wash their hands—among others.

the poet the poem pic.twitter.com/hs7bWk1G8r

the poet the poem pic.twitter.com/mwYEYP6ODx

The Poet The Poem pic.twitter.com/KRhmdl4izN

Leave it to Keep It podcast host Ira Madison III to evoke Mary Alice’s blackmail note from the first season of Desperate Housewives for the “the poet, the poem” meme. They were the best of times; they were the most desperate of times.

And what Jersey Shore fan can forget the time Snooki penned a heartfelt note to their housemate Sam—after her paramour and fellow housemate Ronnie was seen making out with two girls, in addition to putting his head between a cocktail waitresses breasts and “grinding with multiple fat women?”

Finally, this prose gets the recognition it so truly deserves!

The poet. The poem. pic.twitter.com/KqjTSNGP0p

As does the street skateboarding legend Jamal Smith’s “whack” meme, from a few years ago.

The poet The poem pic.twitter.com/mBzNPlxijF

And for those happily single among us, Whoopi Goldberg’s contribution to “the poet, the poem” meme belongs in like, the Louvre or something.

The Poet The Poem pic.twitter.com/EgnZ1biM2Q

Although in retrospect, some might find that Whoopi’s “GIRL, please stop talking” will go down in history as truly her finest opus. Just consider her the patron saint of “the poet, the poem” meme.