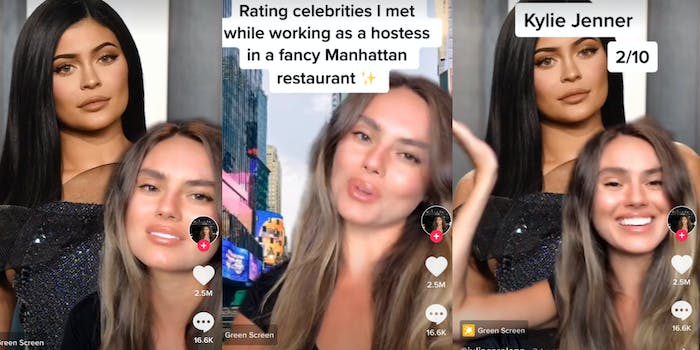 A hostess in New York City is going viral for ranking how celebrities acted as customers on TikTok. While some celebrities like Beyoncé, Nick Jonas, and the Hadid sisters received stellar ratings, Kylie Jenner only received a 2/10 for leaving a poor tip.

“She was fine, but she tipped $20 on a $500 dinner bill. Do with that information what you will,” TikTok user Julia Carolann said.

“Why am I not surprised about Kylie tipping 20 dollars,” one user commented.

“How do I tip more than Kylie and I’m poor,” another user asked.

Many ragged on her alleged billionaire status.

“Imagine being the world’s ‘youngest billionaire’ and only leaving a 4% tip,” one Twitter user wrote.

“Them Jenners grew up with money and still stingy,” a TikTok user said.

Carolann followed up with a part two and rated older sister Kendall Jenner. Kendall fared better than Kylie but still only received a 4/10 rating.

“This is another one where I, unfortunately, did not have the best experience with them,” Carolann said. “[Kendall] used to come in all the time and was pretty cold towards staff. She also usually has someone speak for her and doesn’t speak directly towards staff. I’m going to give her the benefit of the doubt and say she’s just shy.”

Carolann said in both videos the ratings are based only on her personal experience and should be taken “with a grain of salt.”