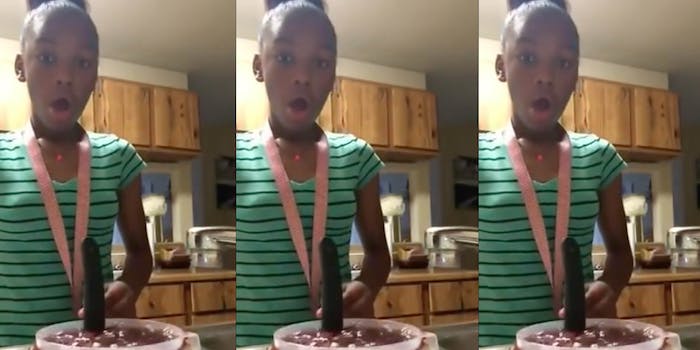 When social media platforms converge, some of the best memes are born. In this case, the “God adding” meme comes from a TikTok video that went viral on Twitter.

The TikTok features a young girl making Kool-Aid and then accidentally dumping an entire container of sugar into the drink mix. The incidental excess has become a meme about God adding too much of one trait to a person. The video actually originates from a 2018 YouTube video allegedly uploaded by the child’s mother, according to BuzzFeed.

Despite the video being two years old, the meme is freshly trending. One user included the video in a tweet which reads, “God adding ‘resting bitch face’ when he made me.”

God adding “resting bitch face” when he made me https://t.co/4dXk8ejAmB

Many of the memes focus on things the Twitter users find to be flaws in themselves. Meanwhile, some of the memes are aimed at positive attributes in others, such as Ariana Grande.

While the meme has been diversely used, there is one trend with this meme: big foreheads.

god adding forehead when he made me: https://t.co/mfheTKUaOR

God adding forehead when he made me https://t.co/xm0HqhGrZa

The meme has expanded to include other videos as well, such as this one of a blindfolded person trying to scoop cotton balls into a bowl. However, it’s a joke in the opposite direction—what God didn’t add.

Another video with a similar meme was popular in December. The video features a man grimacing while pouring the majority of a bottle of Bacardi into what appears to be punch.

God adding my mother’s attitude to my DNA pic.twitter.com/91FDV2HfFt