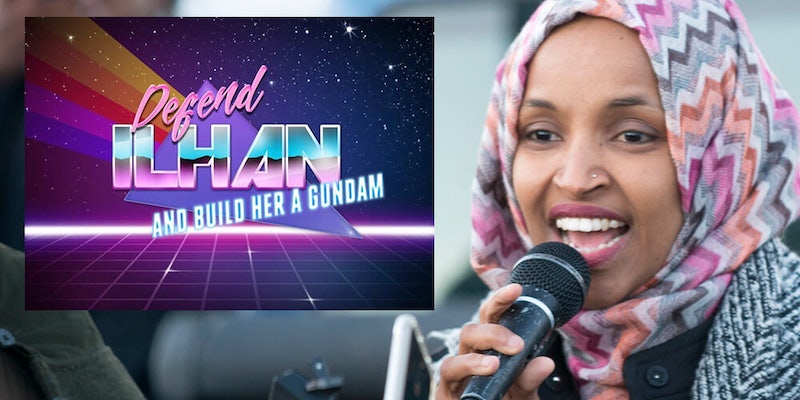 Ilhan Omar responds to ‘Give Ilhan a Gundam’ memes

Nerdy supporters Rep. Ilhan Omar (D-Minn.) were surprised and overjoyed on Thursday when the congresswoman finally acknowledged a growing meme demand: “Give Ilhan a Gundam.”

Although Omar is only serving her first term in Congress, she quickly became a favorite among progressives who support policies like the Green New Deal and student loan forgiveness. She’s made a name for herself as a member of The Squad, a group of freshmen congresswomen of color from four different states, and is a vocal supporter of Sen. Bernie Sanders (D-Vt.) on the presidential primary campaign trail.

But political opponents have also made a name for Omar, targeting her with misleading quotes and false claims. Trump tweeted a heavily edited video of a speech she gave interspersed with clips of the Sept. 11 terrorist attack. While she is inundated with these attacks and even death threats, there’s a growing movement to defend her—with memes. One call to action stood out and took hold: “Defend Ilhan and build her a Gundam.”

ilhan Omar should recieve a Gundam, free of charge

A Gundam is, in short, a “mobile suit” mecha, or a giant robot exoskeleton that is piloted by someone riding inside. It comes from the sci-fi franchise Gundam, which began with a TV series in 1979 and is now a staple of anime. The meme eventually made its way to the Sanders campaign, where an organizing director, Jack Califano, made a joke issues page for “Give Ilhan Omar a Gundam.” The text of the spoofed page reads, in part, “When I am President, we will finally give her a Gundam.”

You heard the man. pic.twitter.com/MBZlOLxVas

Twitter erupted at Omar acknowledging the meme. People alternatively praised and doubted her familiarity with Gundam, theorized on what model she would pilot, and criticized other politicians for not taking a stance on this important issue.

Joe Biden's silence on the issue of giving Ilhan Omar a Gundam is deafening.

I just wanna know if Ilhan Omar was already familiar with Gundam, and if not I want the transcript of the conversation where not only was it explained but this tweet was composed and okayed https://t.co/Kd0I7rnmcz

Even if Omar (or any congressperson) will almost certainly never get a Gundam, it’s fun to think about what her custom mobile suit would look like—and to consider where she could park it in Washington, D.C.