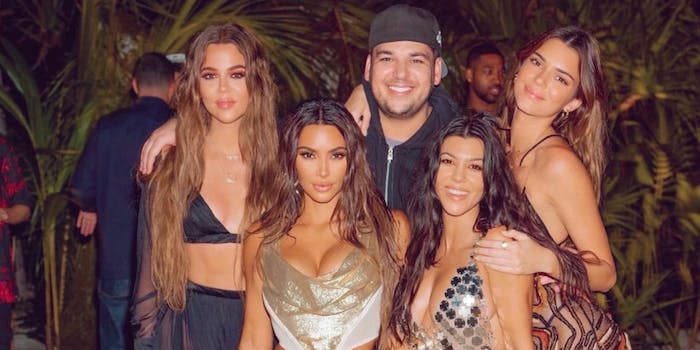 'Kim, there's people that are dying.'

Kim Kardashian West decided to share with Twitter Tuesday that she whisked away her “closest inner circle” to a private island, where they could “pretend things were normal for just a brief moment in time.” Perhaps, unsurprisingly, this didn’t go down well with just about anyone.

Kardashian West tweeted that “after 2 weeks of multiple health screens and asking everyone to quarantine,” she surprised her family and friends with the trip to celebrate her 40th birthday, which was on Oct. 21.

In a follow-up tweet, seemingly still failing to read the room, Kardashian West detailed the activities they partook in while on the island: dancing, riding bikes, swimming near whales, kayaking, watching a movie on the beach, and “so much more.”

Kardashian West briefly recognized her privilege. “I realize that for most people, this is something that is so far out of reach right now, so in moments like these, I am humbly reminded of how privileged my life is,” she added.

However, the tweet is getting ratioed hard, with many roasting the vacation, her tweets about it, and even the recognition of her own privilege.

“I’m not sure ‘I know stuff sucks for all you normies out these because you haven’t seen your friends and family for seven months but I’m so lucky I could gather mine on a private island’ is the humble message Kim thinks it is,'” Lucy Huber, a McSweeney’s editor, tweeted.

Many are struggling to support themselves and their families during the pandemic that has taken over 230,000 lives in the U.S. alone, and people want Kardashian West to simply “read the room.”

“I don’t mind that they went on this trip but the audacity to post it for all to see is so out of touch with reality. The rich really don’t have sympathy for the poor and don’t have the common sense to see how shoving it in people’s faces is bad,” one user wrote in response.

Others are mocking the reality star’s version of normal.

Some are pointing to a server seen in the background of one of their vacation pictures. He’s seemingly the only one wearing a face mask to protect those he is waiting on. Not one of her guests is seen with a mask on.

The tweets had many crying out “eat the rich” sentiments.

The text of her tweet is even getting memed. Users are pairing the text with screenshots from disastrous events, like the ill-fated Fyre Festival, or various movies, such as Midsummer.