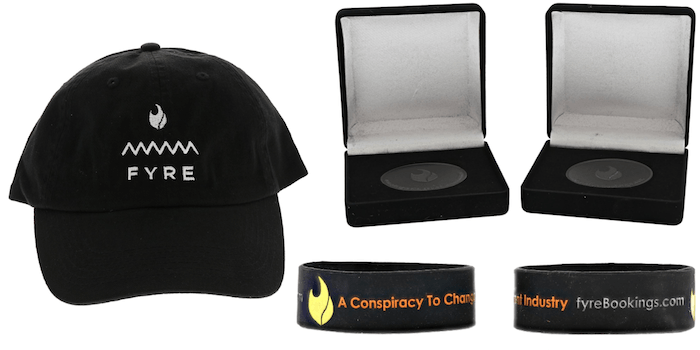 The feds are auctioning off Fyre Festival merch

Festival merch you don't have to stand in line for.

The U.S. federal government has begun auctioning off merchandise intended for the Fyre Festival after seizing it from the event’s founder.

The auction, which will run online from July 30 to August 13, features an assortment of hats, shirts, tokens, and wristbands taken from Billy McFarland.

Items, including sweatshirts originally valued at $125, are now being offered for as little as $20. Tokens featuring the Fyre Festival logo also include text referencing “a conspiracy to change the entertainment world.”

McFarland is currently serving a six-year prison sentence after defrauding investors in the festival and other events out of more than $26 million dollars.

In a statement on the auction, U.S. Marshal Ralph Sozio said that McFarland had planned to make money off the items while on pre-trial release.

“This Fyre Festival-branded clothing and other items that were seized from Billy McFarland were originally intended to be sold at the Fyre Festival itself but were kept by McFarland, with the intent to sell the items and use the funds to commit further criminal acts while he was on pre-trial release,” the statement reads.

Now, the money earned from the merchandise will instead go to victims.

“The proceeds from the sale of these items, all traceable to McFarland’s $26 million fraud, will go toward the victims of his crimes,” Sozio said.