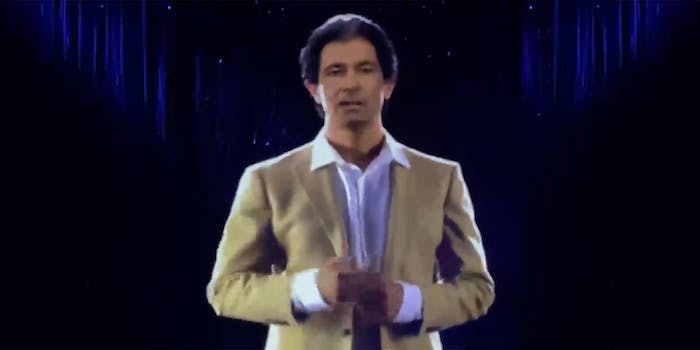 'I see Kim has upped the relatability since the private island tweet.'

Kim Kardashian West’s 40th birthday is the gift that keeps on giving for meme-makers.

Days after getting memed into oblivion for her private island birthday bash, Kardashian West revealed that her husband, Kanye West, defied all expectations with his extravagant birthday present: a hologram of Kim’s late father, Robert Kardashian.

“For my birthday, Kanye got me the most thoughtful gift of a lifetime. A special surprise from heaven. A hologram of my dad,” Kardashian West tweeted. “It is so lifelike! We watched it over and over, filled with emotion.”

“Lifelike” is one way to describe hologram Robert; “hellishly dystopian” is another. In a way, it is sort of sweet. Kardashian West’s hologram father congratulates his fashion mogul daughter for launching several businesses, raising a family, and connecting with her Armenian heritage. And because this was a gift from Kanye, hologram Robert also made sure to praise his creator: “You married the most, most, most, most, most genius man in the whole world, Kanye West.”

Thousands of people responded to the superstar’s tweet with pure horror—not only at the otherworldliness of the hologram, but at the unfathomable wealth and narcissism required to bring said hologram to fruition.

“How far gone must your soul be for something like this to not immediately make you want [to] run away and vomit,” @ibnabitareq asked before comparing Kardashian West to Voldemort.

“I see Kim has upped the relatability since the private island tweet,” David Baddiel quipped.

Other folks demanded to know why Robert Kardashian, who served as O.J. Simpson’s defense attorney during Simpson’s 1995 murder trial, didn’t dish on the former running back.

“So you’re telling me that Robert Kardashian came back in a hologram and just forgot to mention whether or not OJ did it? The audacity of these people I swear,” Katie Nawrocki tweeted.

Then, of course, there were the memes. Twitter users recycled the text of Kardashian West’s tweet and inserted their own hologram photos, running the gamut from Darth Vader to Chevy Chase’s Community character, Pierce Hawthorne.

While you might not be grotesquely rich enough to commission your own family hologram, you can take pleasure in the rest of these Kim Kardashian hologram memes for free.