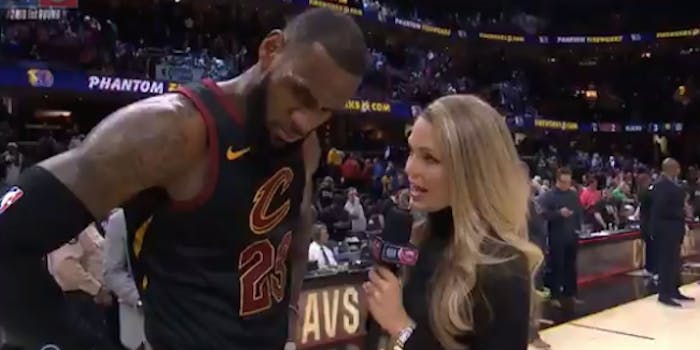 TNT and reporter Allie LaForce caught criticism from NBA fans on Twitter Wednesday night for one of her questions directed at LeBron James, but it turns out the pair had discussed the questions beforehand. In a courtside chat with James after his NBA playoff game, LaForce asked him to weigh in on the recent passing of San Antonio Spurs coach (and James advocate) Gregg Popovich’s wife Erin.

The Spurs announced Popovich’s passing Wednesday while James’ Cleveland Cavaliers were playing Game 2 of their first-round playoff series with the Indiana Pacers, and James seemed overwhelmed with emotion once the topic was broached during his interview. The sincerity of his reaction led a lot of fans to believe that James was hearing the news for the first time.

“That’s such a tragedy, and my best wishes go out to Pop and his family,” James said at the time. “When something like this happens, it puts everything in perspective.”

An emotional LeBron finds out live on air that Gregg Popovich’s wife Erin has passed away. pic.twitter.com/GNtRVWZ86I

Fans on Twitter thought the basketball icon seemed blindsided by the question and had a lot of feedback for TNT and LaForce.

Disgusting to not let him find out in private.

You guys have no class springing that question on Lebron in a live post game interview on court.

You should delete this and apologize to both LeBron and Pop's family.

But it turns out LaForce had vetted the question with James before the cameras were rolling. James was quick to squash the drama Wednesday night, posting a video from his ride home to clear the air.

“I’m not on social media right now, but I was made aware through some friends, through texts, that a question was asked to me postgame, and a lot of people feel like I was blindsided,” he said. “That is absolutely false. Allie LaForce told me that she was going to ask me the question and if it was OK.”

“That was just my emotions coming straight from my heart about the late Erin Popovich,” he continued. “Also, guys, please get off Allie LaForce’s back, because she followed the proper protocol and she warned me. Get off her back, man. She’s very professional and she does a great job at her work.”

.@KingJames sends his thoughts and prayers to the family of Gregg Popovich, sets record straight on reporter’s question. pic.twitter.com/VCsFuEtFVU

So there you have it: beef squashed.

James’ Cavaliers won their game 100-97 and will continue on toward the NBA title.